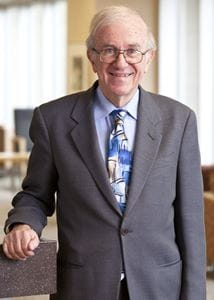 Dr. Einhorn, an Indiana University Distinguished Professor and Lance Armstrong Foundation Professor of Oncology at the IU School of Medicine, is only the 17th recipient of the award, presented to him during the AACR’s annual meeting in Chicago. The award is presented to a scientist who has made outstanding achievements in clinical cancer research.

“I want to very graciously express my appreciation and humility at being the recipient of the Joseph Burchenal Award for Clinical Research,” Dr. Einhorn said. “Successful clinical research is never performed by one individual in a vacuum, and I have the opportunity to work with many extraordinary colleagues. I never had the opportunity to become closely acquainted with Dr. Burchenal, but he was one of my early idols in oncology.”

Dr. Einhorn, who is also a physician-researcher at the Indiana University Melvin and Bren Simon Cancer Center, does clinical research in solid tumor oncology, specifically within the fields of genitourinary and lung cancers. His legacy will be forever linked, however, with revolutionizing testicular cancer treatment. At one point, patients diagnosed with testicular cancer had approximately a 10 percent chance of survival when they developed metastatic disease.

After receiving his medical degree from the University of Iowa in Iowa City, Dr. Einhorn completed fellowships at the University of Texas MD Anderson Cancer Center in Houston and the IU School of Medicine in Indianapolis.

He has published more than 450 peer-reviewed articles. His work has garnered many accolades, including the AACR Richard and Hinda Rosenthal Memorial Award, American Society of Clinical Oncology Karnofsky Award, American Cancer Society Medal of Honor, and the General Motors Kettering Prize. In addition, Einhorn is a member of the National Academy of Sciences and American Philosophical Society.