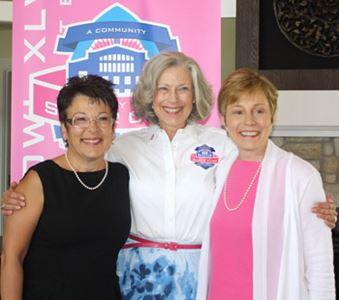 Indy’s Super Cure, an initiative between the 2012 Indianapolis Super Bowl Host Committee and the Susan G. Komen for the Cure Tissue Bank at IU Simon Cancer Center, successfully reached its goal of  increasing minority participation among donors. African Americans represented 36 percent of the donors, Latinas 7 percent and other minorities 3 percent. From past collection events, African American women represented only 3.5 percent, while Latinas represented less than 1 percent.

“I’m overwhelmed by the tremendous response,” Anna Maria Storniolo, M.D., co-director of the tissue bank and professor of clinical medicine at Indiana University School of Medicine, said. “In a typical year, about 500 women take time to donate a precious piece of themselves. In one weekend, a year’s worth of donors showed up. It’s still amazing to me, but it demonstrates the determination of women to contribute to finding a cure for breast cancer.”

Dr. Storniolo, a physician/researcher at IU Simon Cancer Center, is scheduled to appear live on the “Today” show at 9:30 a.m. Friday as the NBC News program originates from Pan Am Plaza in downtown Indianapolis. She will discuss Indy’s Super Cure and the tissue bank.

The Indy’s Super Cure initiative also increased awareness and exceeded a $1 million fund-raising goal for the tissue bank. Awareness increased through considerable news coverage as well as grass-roots efforts to reach targeted populations. In fact, more than 1,900 women are now on the tissue bank’s interested donor list. More than $1.5 million was raised for the tissue bank by individuals as well as sponsorships, table sales, and a silent auction at a November gala.

“I can’t think of a better way to use the platform of the Super Bowl to make a difference that could positively affect the lives of people around the world,” Tiffany Olson, chair of Indy’s Super Cure, said. “Our partnership with the Komen Tissue Bank has far exceeded our expectations. Nothing could make us more satisfied.”

The Komen Tissue Bank is the first and only healthy breast tissue bank in the world. By using samples from women without breast cancer, researchers may be able to determine the differences between healthy and cancerous tissue, which will lead to a better understanding of the disease.

When are the next collections?

The next breast tissue collection events at the IU Simon Cancer Center are March 10 and Nov. 3. Other collection events will take place June 9 at the Norton Cancer Institute in Louisville, Ky., and Sept. 29 at Cook County Health & Hospitals System in Chicago. Visit www.komentissuebank.iu.edu to join the interested donor list. Interested donors will receive regular updates after joining the list.