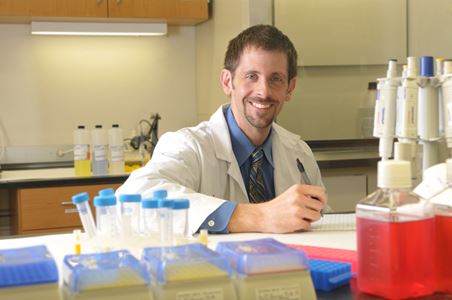 Bryan Schneider, M.D., associate professor of medicine at Indiana University School of Medicine, and colleagues identified a genetic biomarker that causes neuropathy among some breast cancer patients using a class of chemotherapy drugs called taxanes.  That research is featured in 2011 Clinical Cancer Advances: ASCO’s Annual Report on Progress Against Cancer. The report – published online today in the Journal of Clinical Oncology — is an annual, independent review of advances in cancer research that have had the greatest impact on patient care.

Dr. Schneider’s study is one of the first genetic biomarkers to have been reported for neuropathy caused by taxanes, which includes paclitaxel or Taxol.

The finding may eventually lead to a blood test to determine if a patient is at risk of developing neuropathy. Dr. Schneider and colleagues found the gene by conducting a comprehensive genetic look at more than one million genetic variations in each of the 2,204 breast cancer patients studied. The patients were enrolled in the Eastern Cooperative Oncology Group clinical trial E5103.

The study also found that older patients and African Americans were much more likely to have neuropathy.

Dr. Schneider and colleagues will advance their research with additional trials to validate these findings and to determine whether a different type of taxane therapy would result in less neuropathy in the more susceptible genetic group.

Earlier this fall, the Conquer Cancer Foundation of the American Society of Clinical Oncology (formerly The ASCO Cancer Foundation) named Dr. Schneider the recipient of the 2011 Advanced Clinical Research Award (ACRA) in Breast Cancer. Recipients are selected based on their unique patient-oriented approaches to research. Additional selection criteria include the significance and originality of the project, appropriateness and feasibility of the proposed research methods, potential impact of the research, and prior research experience, and accomplishments of the applicants.

The three-year grant, supported by The Breast Cancer Research Foundation, provides $450,000 to further Dr. Schneider’s research. He is a past recipient of the Conquer Cancer Foundation’s 2006 Career Development Award and 2002 and 2003 Merit Awards.