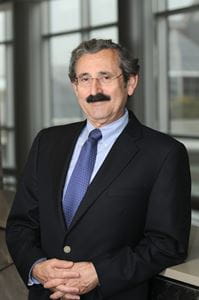 Dr. Korc currently is the scientific leader of the Pancreatic Cancer Group at the Dartmouth-Hitchcock Norris Cotton Cancer Center in Lebanon, N.H.

“Pancreatic cancer takes far too many lives each year. We have much to do. For Dr. Murray Korc, pancreatic cancer research is a calling. His life-long dedication researching pancreatic cancer and his intellectual curiosity will enable us at the IU Simon Cancer Center to contribute much to this all-too-common deadly disease,” said Patrick J. Loehrer Sr., M.D., director of the IU Simon Cancer Center, H.H. Gregg Professor of Oncology and associate dean for cancer research at the Indiana University School of Medicine.

The Myles Brand Professorship was created to help physicians and scientists at the IU Simon Cancer Center to continue investigating devastating malignancies, such as pancreatic cancer, which claimed the life of Brand, the 16th president of Indiana University.

Dr. Korc, who will move his research laboratory to IU, is one of the first researchers to receive incentive funding made possible through Lilly Endowment’s gift to create the Physician Scientist Initiative. To capitalize on the unique talents that skilled investigators with medical degrees bring to scientific research, the IU School of Medicine created the Initiative, which is supported by a $60 million grant from the Lilly Endowment.

In 2011, an estimated 44,030 new cases of pancreatic cancer are expected to occur in the United States and nearly 755 Hoosiers will be diagnosed with the disease. An estimated 37,660 deaths are expected from the disease in 2011, including 810 in Indiana. The purpose of the Brand Professorship is to fund and encourage research that may one day lead to a cure.

Brand served as IU’s president from 1994 to 2002 and was president of the NCAA from January 2003 until his death on Sept. 16, 2009, at the age of 67. IU President Michael A. McRobbie announced the campaign to create the endowed faculty chair in cancer research during the public tribute to Brand.

The announcement of Dr. Korc’s new position comes on the eve of the second anniversary of the death of Brand and of Melvin Simon, who also died of pancreatic cancer. Simon, the shopping mall developer and philanthropist, along with his wife, Bren, pledged $50 million to name the Indiana University Melvin and Bren Simon Cancer Center.

“Creation of an endowed fund to benefit cancer research will serve as a permanent, meaningful tribute to Myles Brand and provide hope to the nearly 1.5 million Americans who are diagnosed with cancer each year,” said President McRobbie. “I am delighted to be able to welcome a scientist of the caliber of Murray Korc to the university as the first Myles Brand Professor.”

“I feel humbled by the privilege of having been selected as the first physician-scientist to be the inaugural Myles Brand Professor, a position created to honor the memory and legacy of a transformative leader who championed academic excellence and integrity,” said Dr. Korc. “I hope to work with my colleagues to design strategies for early pancreatic cancer detection, improved prevention and treatment modalities, and meaningful prolongation of pain-free survival.” Dr. Korc also will hold the titles of IU professor of medicine and of biochemistry and molecular biology.

Dr. Korc’s research has been continuously funded by the National Institutes of Health (NIH) since 1981. His focus is on aberrant growth-factor signaling in pancreatic cancer and genetic mouse models of pancreatic cancer, with the goal of designing novel therapeutic strategies. He has published  more than 250 peer-reviewed manuscripts, and he is internationally recognized for his seminal contributions to the understanding of the role of the EGF receptor and transforming growth factor-beta in pancreatic cancer, work recently recognized by an NIH MERIT award. The NIH presents the highly-selective MERIT Awards to researchers who demonstrate superior competence and outstanding productivity in research endeavors.

Dr. Korc comes to IU from Dartmouth Medical School where he currently is the Joseph M. Huber Professor of Medicine and a professor of pharmacology and toxicology at The Dartmouth Institute for Health Policy and Clinical Practice. Since 2003, he has served as chair of the Dartmouth Hitchcock Medical Center Department of Medicine and as a member of the Section of Endocrinology. From 2008 to 2010, he was the associate dean for clinical and translational research at Dartmouth.

Dr. Korc received his medical degree in 1974 from Albany Medical College in Albany, N Y. He completed internal medicine training at Albany Medical Center Hospital in 1977 and an endocrinology fellowship in 1979 at the University of California, San Francisco.

The Indiana University Melvin and Bren Simon Cancer Center is an Indiana University School of Medicine and Indiana University Health partnership. Located in Indianapolis, IU Simon Cancer Center serves as a regional and national referral center for state-of-the-art cancer treatment and is Indiana’s only National Cancer Institute-designated cancer center that provides patient care. The partnership between IU School of Medicine and IU Health is dedicated to establishing a state-wide health care delivery system that is supported by the scientific resources and clinical expertise of the medical school. Its mission is to advance the understanding, prevention and treatment of cancer throughout Indiana and the world with patient-centered care, acceleration of promising science and collaborative educational programs. For more information, visit www.cancer.iu.edu.