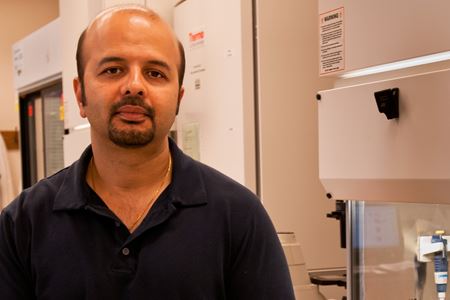 The drug, Fasudil, has been used to treat stroke patients because it is a vasodilator, meaning it dilates blood vessels. However, its potential in leukemia emerged because its method of action is blocking the activity of a protein called Rho kinase, or ROCK.

ROCK, which plays a role in a variety of cellular activities, attracted the attention of the national research team led by Reuben Kapur, Ph.D., Frieda and Albrecht Kipp Professor of Pediatrics at the Indiana University School of Medicine, as they were studying the effects of mutations in several other proteins that are associated with difficult-to-treat types of leukemia. Those mutations, experiments revealed, resulted in hyperactivation of ROCK. The group reported its findings in the Sept. 13, 2011 issue of the journal Cancer Cell, which was published online Sept. 12.

“There’s been a push to identify targets that get revved up as a result of the mutations we find in the leukemia cells, and we found that ROCK appeared to be hyperactive. Fasudil is available and targets ROCK, but its possible effectiveness as an anti-leukemia agent had not been tested,” said Dr. Kapur, an investigator at the Herman B Wells Center for Pediatric Research and the Indiana University Melvin and Bren Simon Cancer Center.

“Many of these leukemia patients are older, especially those with acute myelogenous leukemia, and they undergo extensive chemotherapy,” said Dr. Kapur. “If we could find other ways of treating them that would be more tolerable, that would be useful for older populations.”

Leukemia covers a broad range of diseases involving excess production of immature white blood cells. The research team investigated the ramifications of mutations in genes for two receptor proteins known as KIT and FLT3. They also studied the effects of BCR-ABL, a protein produced when parts of two chromosomes swap places, an abnormality that is associated with chronic myelogenous leukemia. KIT, FLT3 and BCR-ABL are known as oncogenes due to their potential to cause cancer.

In each case, blood-producing bone marrow cells with the mutations all had hyperactivated levels of ROCK. The researchers then were able to slow the growth of those cells in laboratory tests by using the ROCK inhibitor, Fasudil. Similarly, the drug significantly prolonged the survival of laboratory mice with leukemia.

“This drug could be fairly potent across the board with a lot of leukemias,” he said. “Whether alone or in combination with existing therapies it could have a lot of potential.”

In addition to Dr. Kapur, lead authors of the paper were IU researchers Raghuveer Singh Mali, Ph.D., assistant research professor of pediatrics, and Baskar Ramdas, Ph.D., postdoctoral fellow in pediatrics. Additional research was contributed by investigators at Genentech Inc., the Cleveland Clinic, the Broad Institute of MIT and Harvard and Northwestern University.

Funding for the research was provided by the National Institutes of Health and the Riley Children’s Foundation.