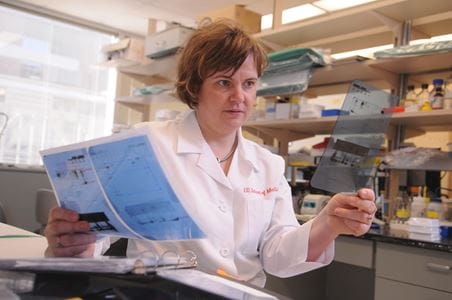 Not only did a surprising 70 percent of patients in the phase II trial show a positive effect from the new therapy, the researchers say they may have discovered biomarkers that could help identify women who would respond best to the therapy.

“The potential that this regimen is efficacious, combining decitabine with the carboplatin therapy, is very exciting,” said Kenneth Nephew, cancer researcher in the IU Medical Sciences Program-Bloomington and at the Indiana University Melvin and Bren Simon Cancer Center. “It’s well tolerated and didn’t have any dose-limiting toxicities. We could enroll patients with confidence because of these results.”

Ovarian cancer is aggressive and incurable and is the fifth leading cause of cancer death in women. Carboplatin is considered the most efficient drug therapy, yet women with recurring ovarian cancer often become resistant to the drug after one or two rounds of treatment. Once this occurs, they often survive less than a year because no effective second-line treatment exists.

The 17 women who enrolled in the IU Simon Cancer Center clinical trial all had become resistant to carboplatin, with their cancer progressing. The 12 women who benefited from the experimental therapy saw their tumor growth slow down or completely stop. In one woman, doctors could no longer find the tumor. Nephew said the progression of the cancer in these women resumed, on average, after 336 days.

Lead investigator Daniela Matei, M.D., an oncologist and associate professor of medicine at the Indiana University School of Medicine, has been treating women with ovarian cancer for 10 years and has conducted  numerous clinical studies. The women in this phase II study had already undergone other experimental therapies once their cancer had become resistant to carboplatin, so the high rate of women experiencing a positive effect from their carboplatin-decitabine combo was surprising, as was the number of women who remained in remission after six months, Matei said.

“Typically in this group of patients you’d anticipate response rates of less than 5 percent and no patients would be expected to be in remission at six months,” said Matei, a physician-scientist at the IU Simon Cancer Center. “In our trial, more than half (nine women) of the patients were without progression at six months.”

Matei discussed the findings of the phase II trial earlier this summer during a presentation at the American Society of Clinical Oncology national meeting.

Their research, which Nephew describes as “truly translational” because of its dependence on both lab and clinical work, has been supported by the National Institutes of Health, National Cancer Institute, Walther Cancer Foundation in Indianapolis, and the Ovarian Cancer Research Foundation. The researchers are seeking grant funding for the larger trial during which they will test the current combination and compare it with other approved therapies for ovarian cancer.

In the phase I and phase II trials, decitabine was administered daily to patients intravenously for five days followed on the eighth day with carboplatin. After a month, the regimen begins again.

The researchers have been investigating the addition of decitabine, which is marketed as Dacogen in the United States, because they suspect it reactivates tumor suppression genes that are turned off in ovarian cancer cells and improves cells’ susceptibility to anti-cancer drugs like carboplatin.

Matei said they were very fortunate because the NCI funding for the phase II trial let them perform exploratory work involving tumor biopsies from the women. This allowed them to identify significant changes in gene make-up before and after treatment. She said they are narrowing this down to focus on specific genes so the information can be used in subsequent trials.

“The science associated with the trial is novel and exciting and could have impact in the future,” she said.

Ovarian cancer is the deadliest of all gynecologic cancers. Worldwide, about 200,000 women are diagnosed with ovarian cancer and 125,000 women die from this disease annually. In the United States alone, there will be approximately 22,000 new cases of ovarian cancer each year, and about 15,500 women will die of the disease. Currently there is no effective means of early detection.