Shot in the Arm

To pick up the pace of vaccinations, Indiana University launched clinics on campuses to expand access to students, faculty and staff. 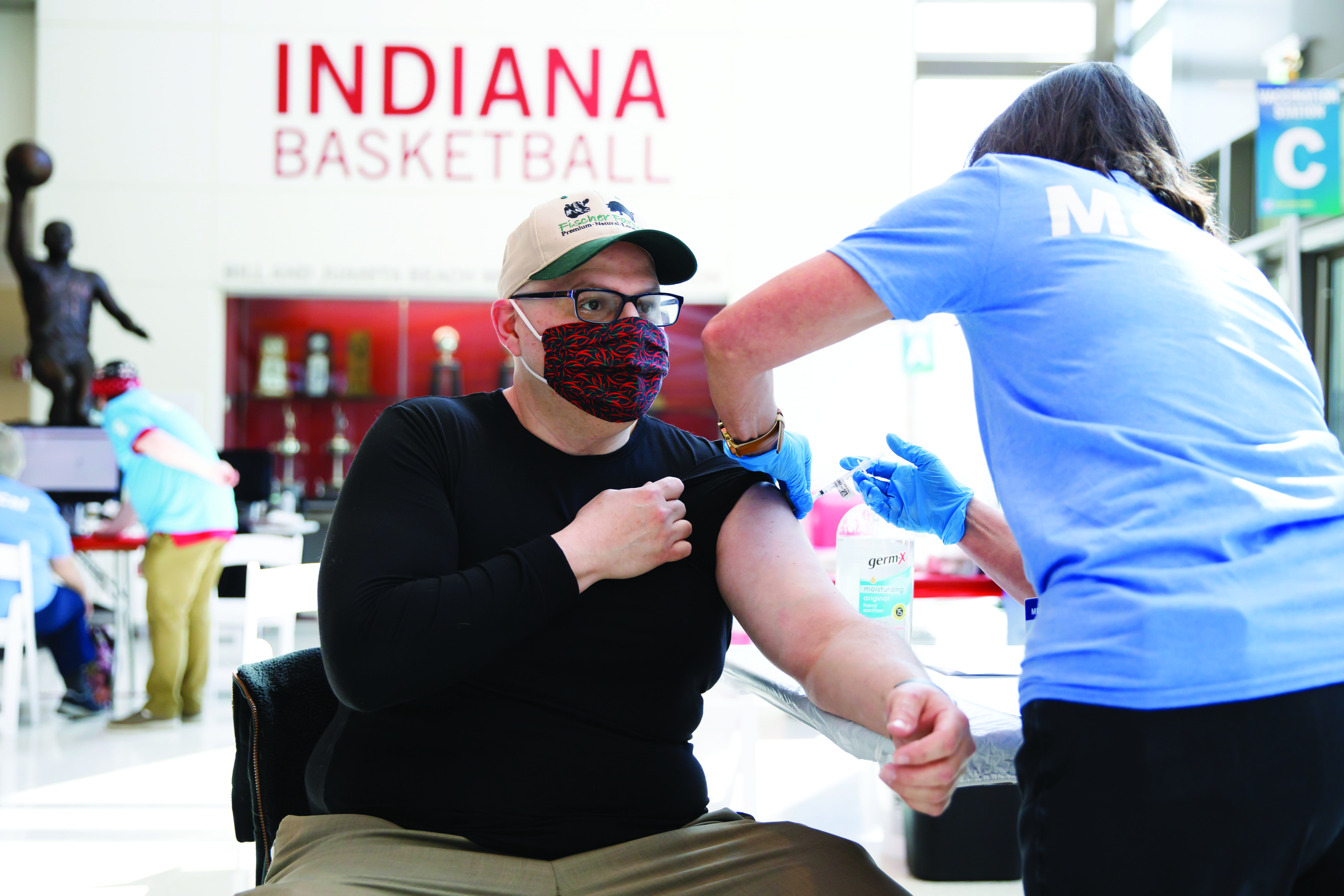 Omar Alani was the first person to receive a dose of Pfizer’s COVID-19 vaccine at an IU-operated clinic in Bloomington.

OMAR ALANI might be the answer to an obscure bit of trivia in the future: Who received the very first COVID-19 vaccine administered by Indiana University?

The assistant manager with IU Dining rolled up a sleeve, stared straight ahead and waited for the needle. That moment in late March, inside the foyer of Simon Skjodt Assembly Hall, lacked pomp and circumstance. And Lana Dbeibo was fine with that.

That uneventful shot—the first dose of more than 100,000 shots to be administered at IU-run clinics—was simply “wonderful,” said Dbeibo, MD, IU’s director of vaccine initiatives. She and the IU COVID vaccine team had spent four months hurrying up to get IU ready for the vaccine, only to wait for the first doses. Then, she said, “Just like that, we were up and running. It was beautiful.”

Like the rest of the nation, IU entered Spring 2021 buoyed by optimism that vaccination efforts would achieve enough momentum to curtail the pandemic. The percentage of vaccinated adults continues to grow. But, as IU prepares for something approaching a typical fall semester, the key indicator will be the vaccination percentage across the student demographic.

IU enrolls more than 90,000 students across nine locations­—enough to make it the fourth-largest city in Indiana. There are thousands of faculty and staff alongside them. And they all flow seamlessly between their campuses and the communities surrounding them.

ROLLING OUT vaccines was the next logical step in a year that saw IU build out a system to confront a once-in-a-century crisis.

At the outset of the pandemic, the university created a medical response team led by IU School of Medicine Dean Jay L. Hess, who has drawn on the expertise of faculty such as Dbeibo to execute the plan.

From the early days, one arm of the system has overseen mitigation testing, which gauges the baseline level of spread at each campus. Another arm was tasked with symptomatic testing. That data feeds a contact tracing program that employs 60 people to gather information vital in quickly tamping down a potential outbreak.

The university also set up in-house testing labs in Indianapolis, which have processed approximately 500,000 samples. In many cases, results from the tests have been turned around in less than 24 hours.

Mitigation testing at both IUPUI’s student center and parking garages on campus became almost mechanized. Students, faculty and staff—responding to email notices—arrived to receive a plastic vial, an area to stand while filling it with saliva, and a touchless spot to hand it over. All in a matter of minutes.

Launching a vaccination effort simply meant “layering over” existing operations, said Dbeibo, who was appointed to her role last December. “IU had already set all this up,” she said of the university’s COVID response. “It gained experience.”

ONCE VACCINATIONS began, roughly a thousand people a day began passing through clinics in Bloomington and Indianapolis with a similar precision, with sometimes as little as five minutes between check-in and vaccination. The operations hum along so efficiently that the volume of people is hardly noticeable.

A few months earlier, as the year got started and the waiting game for vaccines began, the operation remained little more than a technocrat’s plans on a page.

By January, Dbeibo and other medical response teams had worked out the details with various campus units—student health, public safety, and emergency operations—to get clinics up and running. They had contingency strategies to quickly ramp up staffing.

IU-Southeast opened a vaccine clinic in collaboration with the Floyd County Health Department. The university had submitted plans for the operation in Bloomington, and at IUPUI preparations were made to notify the first groups eligible for vaccines.

And then they waited.

It was not until March that state health officials and Gov. Eric Holcomb got word that the state’s vaccine supply was stable enough to make vaccinations widely available.

IU had hoped to vaccinate every student before they left at the end of the spring semester. But the short window—and the requirements of the two-dose Pfizer vaccine—meant clinics faced a time crunch: Administering two shots, 21 days apart, to upwards of 64,000 people, in six weeks.

As the semester drew to a close, Dbeibo promised to push as much as possible, but a fallback loomed necessary. “If they are staying in Indiana,” she said, “they can get the second dose anywhere.”

The time crunch meant changes to how clinics function. In Bloomington, the clinic serves the university and general public and is open three days a week. Yet, in an effort to hit the target, there were additional days when doses were explicitly earmarked for students, faculty and staff.

“We’re having conversations at the local level where regional campuses are located about how we can facilitate access to vaccines,” Dbeibo added.

FOR DBEIBO, preparing the vaccine clinics was another operational challenge in a year defined by them.

Before the pandemic, she oversaw infection control at IU Health Methodist Hospital, spending half the work week trying to prevent infections in its various units, and the other half treating patients with infections. Once COVID arrived, it quickly blotted out her clinical work. Her focus shifted to rapidly adjusting policies to protect hospital staff confronting an entirely new threat.

She confronted questions about what kind of protective equipment was needed, how the infection could be acquired and the timing and logistics of patient testing. “It all evolved so fast,” Dbeibo said. “Then you need the right structures to make it clear where it’s coming from and when it’s changing.”

In late summer, Dbeibo needed to go on parental leave. By then, the hospital’s protocols were sound enough to withstand the fall surge. When she returned, she had another job waiting for her. Initially, she helped analyze campus outbreaks. But once the vaccines came along, Dbeibo’s experience overseeing the COVID vaccine clinic at Methodist made her the logical choice for IU.

“It gave me more confidence that I should be able to do this,” she said.

The result has been an experience that’s been both seamless and swift. There are still day-to-day worries about whether supply will ebb and whether clinic hours should be tweaked. Yet one issue remains on Dbeibo’s mind. In some ways, it’s a good problem to have. “Making sure everyone has access,” she said. “I love to see uptake high. We will work to make sure everyone can get an appointment.”