Aaron Carroll is seemingly everywhere—blogs, pods and TV—helping the public grapple with evolving information as the pandemic unfolds. 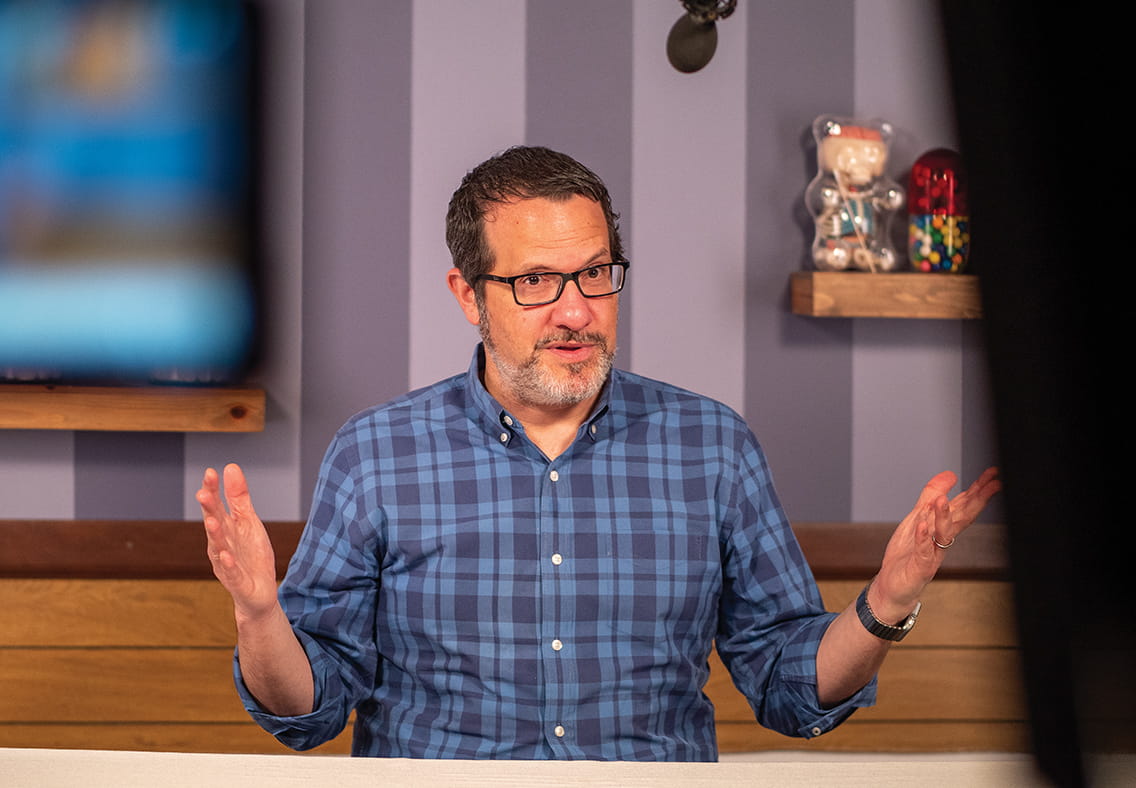 Aaron Carroll’s multiplatform presence, including his Healthcare Triage program on YouTube, touches on a myriad of COVID news.

WAY BACK in March, when America was just awakening to the pandemic threat and the nation’s known COVID-19 death count was less than 100, Aaron Carroll used his platform as a health policy contributor to The New York Times to offer a sobering assessment.

“I strive to place your fears in context and usually tell you that you shouldn’t be nearly as afraid as you are,” he wrote then. “But when it comes to the nation’s response to the new coronavirus, I cannot be so reassuring.”

Carroll, MD, MS, a professor at Indiana University School of Medicine, a health services researcher with a background in public health, a pediatrician and a prolific health policy writer, went on to warn about the nation’s limited number of ventilators and ICU beds. It wasn’t reassuring, but it was real. And it wouldn’t be the last time he would share hard truths.

In a year when our nation’s resolve in a public health crisis has been severely tested, when this new contagion has at times stretched the health care system to its limits, when information has been conflicting and confusing, Americans have gravitated to people who can make sense of the evolving science, communicate clearly and who are unafraid to share the hard truths.

With a column in the Times that reaches millions, appearances on MSNBC, CNN and NPR, a running commentary with 58,000 Twitter followers, and episodes of his Healthcare Triage podcast—Aaron Carroll is one of the more prominent tellers of hard truths.

“Like most everyone, I’ve been seeking out and clinging to a few trusted, humane voices of reason through this pandemic,” said Adam Sternbergh, an author and senior editor at The New York Times Sunday Magazine wrote on Twitter, “and @aaronecarroll has been that from the very start.”

Carroll is uniquely positioned to be a voice of reason.

As a Times columnist, he interviews leaders in the scientific, medical, business and political community across the country about the pandemic. That includes people who crafted the pandemic responses for the American Enterprise Institute, Harvard University and the World Bank.

As one of the key figures in IU’s Medical Response Team for COVID-19, Carroll has added that knowledge to his work marshaling an “army” of people he leads in IU’s COVID mitigation efforts. His legion has handled the preemptive testing on IU’s campuses around the state—testing aimed at identifying infected individuals before they have symptoms and before they have a chance to spread the disease.

When students returned to the Bloomington campus in August, and they were greeted with saliva-based tests, those were Carroll’s troops. Like any army, getting the supply chain started was key. Initially, that meant procuring tests, setting up labs to process them and monitoring the results as they come in.

There have been bumps in the road. That can happen when starting a testing operation from scratch and collecting 10,000 to 15,000 tests a week. But by the arrival of fall, the testing capacity looked to be ready for whatever COVID may have to offer. In fact, Carroll has a goal—and one that may have been realized by the time you read this—that IU could conduct more COVID tests each week than the rest of the state of Indiana.

“When you look at everything we’ve put together, it’s a pretty robust response that I would put up against anybody. Partially, it’s due to IU’s leadership and commitment to its constituents. I’ve been saying quite consistently that a lot of this is will,” Carroll said of IU’s COVID response. “And there was a will here that was not everywhere. Other schools have tried to do it with far less.”

Carroll’s battlefield view—combined with his access to the nation’s leading COVID thinkers and planners—has given him a perspective on the situation as well-rounded as just about anyone. Six months after his warning about ventilators and ICU beds, Carroll dropped another heavy dose of reality when he wrote in the Times that Americans shouldn’t overestimate what a vaccine will do—even when one is approved and it proves to be effective.

Aside from the challenges of distribution, he notes that it’s unclear how long the benefits of a vaccine will last or whether it will benefit all populations. Masks and social distancing will still be needed, he said. Failures in those areas could lead to new outbreaks. “It is much more likely that life in 2021, especially the first half of the year, will need to look much like life does now,” he wrote.

If Carroll is a habitual truthteller, he is an accidental journalist.

As a researcher, he found himself constantly writing grant applications, writing remarks for public talks, and writing for other purposes. But he wanted to get better at it. So, he committed to writing 800 words a day for two years. That led to a blog. With health care reform as an issue in the 2008 election and early in the Obama years, Carroll began blogging about that. He became a go-to source for journalists, academics and others. In 2013, he started Healthcare Triage, a video series about health policy.

As data journalism began gaining prominence at places like Vox and fivethirtyeight.com, The Times started its own version: The Upshot. Carroll asked its editor if anyone was writing about health policy. Soon, the gig was his. This spring, with COVID dominating the landscape, Carroll took on a new role—health care opinion columnist.

Carroll sees that role in COVID-19 commentary as someone who can shoot straight in a landscape clouded by politics and hyperbole. “I’m trying to bring some rationality, some data and evidence and some realism to this. It gets a little bit off to one side or the other. It gets partisan or it gets political,” he said.

While there is concern about the winter ahead—with a health superstorm caused by COVID and flu—Carroll doesn’t venture a prediction for what’s to come. But he comes back to a regular theme of his: tradeoff.

The NBA found a way to have a basketball season, but its athletes had to give up their freedom of movement—instead, living in a bubble. College students can come to campus to learn, but they can’t cluster together in mass gatherings, without masks, in indoor settings. Carroll sees such tradeoffs continuing.

“We have to give some things up, but we get something in return. And if we want stuff, then we have to talk about what we have to give up,” he said. “It’s just sort of understanding the competing demands and the risks and benefits of all the things we do.”