In the past decade, concern over brain injuries in sports has grown. But how much does science truly know? IU School of Medicine helps lad a pioneering study to tell players, parents, and all of us more about concussions and who is at risk in the years to come. 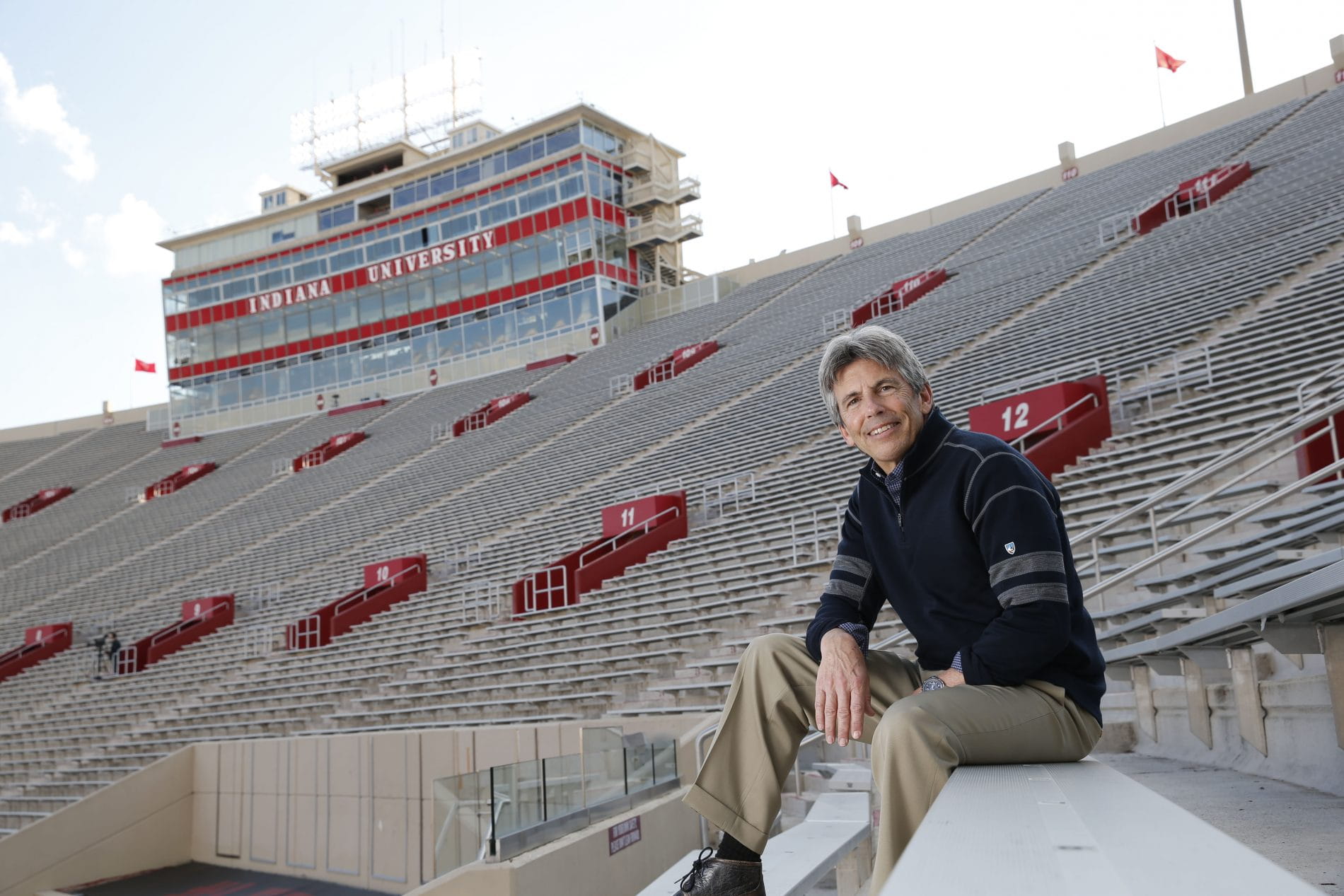 Dr. Thomas McAllister, Chair of the Department of Psychiatry at the Indiana University School of Medicine.

SHAYNA GAMM is hesitant but honest.

“Do you think you have ever had a concussion?” I ask.

It’s a balmy Thursday in August. She’s fidgeting near a turn of an indoor track in Harry Gladstein Fieldhouse in Bloomington, Indiana. Gamm plays softball. A catcher, the California native transferred to Indiana University from a junior college outside Chicago.

“Yes, I have had a concussion,” she answers. “I had one in the fifth grade.”

Sure, her head—encased in a plastic shell—has taken its share of foul tips or been grazed by the end of an aluminum bat in the years since. Yet Gamm is confident her history of self-diagnosis has been sound.

Two minutes before, though, a portion of Gamm’s preseason physical was designed to take away any need for guessing or doubt. Gamm joined the ranks of 35,000 college athletes and military cadets taking part in a concussion study researchers think will tell us more about an injury we’ve only just started to understand.

Three years ago, Thomas McAllister, MD, helped launch the hunt for answers. McAllister, who arrived at Indiana University School of Medicine in 2013 to chair the Department of Psychiatry, manages the logistics of the Concussion Assessment and Research Education Consortium.

Known as CARE, the $30 million study of sport-related head injuries is unfolding at 30 universities and military service academies across the country.

When it concludes, the largest study of concussions ever conducted could become the modern equivalent of the Framingham Heart Study, tracking players and telling us why some people struggle with concussions, others recover quickly, and still others are spared altogether.

THE MECHANICS of a concussion are simple: The brain, with the consistency of flan, slams into the skull. The shearing rotational force twists a fragile electrical grid of neurons. To cope with the trauma, the brain essentially powers down the affected regions, kicking off a cascade of symptoms such as dizziness, nausea and blurred vision.

By and large, people recover and lead their lives with no ill effects. But some don’t, and no one knows why. Other questions have tugged at concussion researchers over the past 15 years. How does an injured athlete’s brain heal? Does the process continue after symptoms fade? When is it safe to resume play or practice? Why do some athletes fall prey to long-term cognitive issues?

Who’s most at risk?

Researchers have long known what is needed: a national research network. Typically, studies have relied on small sample sizes. Protocols aren’t uniform, and that’s before you consider differences among sports, gender, age and a host of other variables. It makes whatever conclusions are found difficult to apply to the broader population. A large, unified network would solve these problems.

But there’s a hitch.

“It’s really expensive,” McAllister said. “And it takes a lot of manpower.”

Three years ago, however, the NCAA and U.S. Department of Defense committed to underwriting the $30 million cost to make the study a reality. They turned to McAllister for a proposal. The funders also reached out with similar requests to Steven Broglio, PhD, an associate professor of kinesiology at the University of Michigan, and Michael McCrea, PhD, a neuropsychologist at the Medical College of Wisconsin. Rather than compete, they united. The crux of their pitch: Build a two-armed investigation, one studying the physical manifestations of concussion and the other delving into its neurobiological effects.

“The package we put together demonstrated we could get three schools, each of which could probably be independent investigators, to say, ‘Let’s do this together,’ ” said McAllister, the Albert Eugene Sterne Professor of Clinical Psychiatry.

McAllister, who has studied traumatic brain injury for nearly three decades at Dartmouth, the University of Pennsylvania and now IU, was tasked with managing the logistics of a study that in its first two years collected data on more than 29,000 athletes and 2,100 concussions.

The IU School of Medicine also offered vital talent and infrastructure. Tatiana Foroud, PhD, who chairs the Department of Medical and Molecular Genetics, is a nationally recognized expert in establishing and managing biorepositories. Andrew Saykin, PsyD, director of the IU Center for Neuroimaging, is at the forefront of using imaging to visualize changes in the brain. Finally, Barry Katz, PhD, who oversees the Department of Biostatistics, was called upon to clean and manage a trove of data.

And critically, the project benefits from McAllister’s unruffled temperament.

“I knew from a science standpoint, there’d be zero issues. He’s got a great reputation. There’s no debating that,” Broglio said. “He is incredibly thoughtful.”

“NO,” SAID Terry Horner, MD, an Indianapolis-based neurosurgeon. “Like this.”

Holding a blue Bic pen in front of his bespectacled face, Horner twisted his lean torso in a 180-degree arc, each swivel in time to the beat of a metronome popping from the speaker of his iPhone.

Ten feet away, a line of IU athletes waited for tests of their vision, memory and balance. They also supply their family medical history, then sit down at a computer terminal for ImPACT testing, which measures their baseline neurocognitive performance. These pre-season assessments would be stored away and used as a guide. Athletes who suffer a concussion are put through the tests again to measure how the injury affects them.

The heavy lifting of CARE is done at sites like the one in Bloomington. Kyle Winters, an athletic trainer who was hired solely to help with data collection, tested 120 athletes before classes started in August—many of whom didn’t realize their participation might yield insights that could change the way they are treated if injured.

“I don’t think most of them do yet,” Winters said. “About 95 percent of them—by the time they leave—will hopefully have a greater understanding of what we’re trying to do.”

An hour’s drive north in Indianapolis, the School of Medicine serves as quality control.

For example, athletes at four advanced research sites have blood samples drawn, which are then parceled into 10 millimeter tubes and spun in a centrifuge. The separated blood, plasma and serum are packed on dry ice and shipped to IU for storage. Foroud and her team can track how long processing took and the speed at which samples were spun—a protocol that sets CARE apart from its forerunners. “The rigor with which it’s being done and the numbers being done are so much larger than anything else out there,” she said.

Why the labor intensive process?

Researchers are hunting for biomarkers—signatures floating in the blood of athletes who endured concussions or repeated head impacts. These proteins or metabolic fragments may be hints at whether a player is still injured and how long it takes to recover.

“It might be the case you and I have the same head impact, but we have different variants of a gene that regulates how the brain responds,” McAllister said. “If I have the bad gene and you have the good gene, I’m going to be the one that takes a month or two to recover.”

The study is also studying the use of advanced imaging techniques as a tool to diagnose the injury and confirm whether a player’s brain has healed. The team is especially excited by diffusion tensor imaging, a new technique that measures how water molecules flow along the axons in the brain and reveals how white matter has changed. “If we can develop a more sophisticated way of imaging axons, then we may be able to use this technology to diagnose and monitor concussions,” McAllister said.

IDEALLY, THE CARE study would be extended beyond its initial three years, transforming into a longitudinal effort to track a sliver of athletes as they age. Only time can truly tell if certain genes are linked with cognitive decline, or whether chronic symptoms are coupled with the number of concussions incurred, for instance. “There’s a lot of interest,” McAllister said. “Whether we can turn that genuine interest into funding remains to be seen.”

In the meantime, the study’s leaders are cautious about discussing what they’ve found so far. There is at least another year of data collection still ahead, and answers may be embedded in that data.

“I think there are going to be some eye-opening things people didn’t expect to see,” Broglio said, “but this sample is large enough to stand the test of time.”