Colleagues and friends celebrate the $2.3 million endowment of the Naga P. Chalasani Chair in Gastroenterology and Hepatology 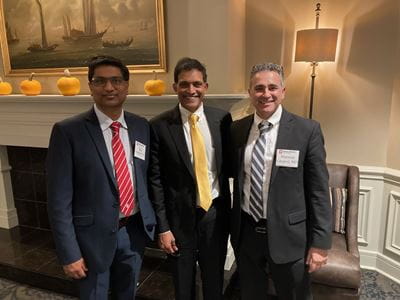 Chalasani, MD, who is the David W. Crabb Professor of Gastroenterology and Hepatology and the Vice President for Academic Affairs at Indiana University Health, stepped down from his role as Interim Chair of the Department of Medicine in January. Over the last 25 years, he has had a distinguished and influential career as a physician, a scientist, a mentor and a leader.

An endowment campaign to fund the chair raised $2.3 million to endow the chair in Chalasani’s honor.

“The success and efficiency of this fundraising campaign is a testament to Dr. Chalasani as an outstanding physician, mentor, scientist, and a friend,” said Mohammad Al-Haddad, MD, Professor of Medicine and Interim Chair of the Division of Gastroenterology and Hepatology.

“In so many ways, Dr. Chalasani has touched the lives and careers of the people around him,” Al-Haddad said. “He has left his mark on the field of hepatology and on the Division of Gastroenterology and Hepatology at IU, and there is no better way to recognize his contributions than naming this important endowed chair after him.”

At a recent celebration of the new chair, several of Chalasani’s colleagues spoke about his important contributions to the division, the department, and the field, and his mentees shared the tremendous positive impact he’s had on their careers. 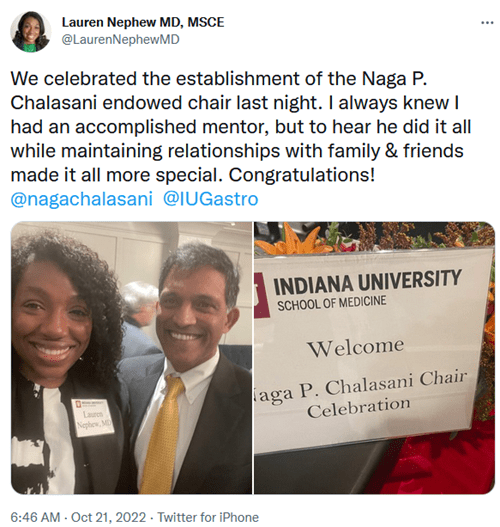 “It was wonderful to hear from so many people, past and present, who have been impacted by Dr. Chalasani's vision and mentorship,” said Lauren Nephew, MD, an assistant professor of medicine who has worked extensively with Chalasani. Furthermore, she said. “The willingness of so many to give so generously to this effort is a reflection of the inspiration he has been to many.”
The views expressed in this content represent the perspective and opinions of the author and may or may not represent the position of Indiana University School of Medicine.