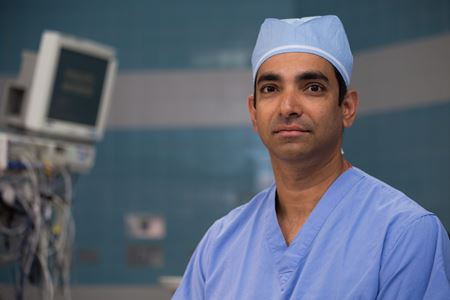 When someone has end-stage liver disease, declining health and death are real possibilities as treatments become less and less effective. In this case, liver transplantation is the patient’s only option. According to IU Heath, there are currently more than 14,000 patients on the liver wait list. Of those patients, 20 percent will die waiting on the 8,000 livers from deceased donors each year. As the need for liver transplants has grown, living donation has become an alternative treatment option for patients, particularly those with lower model for end-stage liver disease scores.

Prior to February 2020, Indiana residents received up to 70 percent of the livers from Indiana donors, exporting up to 30 percent to other states. In 2020 those percentages flipped, with Indiana receiving about 30 percent of local livers and exporting about 70 percent, explained Chandrashekhar A. Kubal, MD, the surgical director of liver transplant program at Indiana University School of Medicine and IU Health.

The program also helped strengthen the educational piece for current residents and fellows at the IU School of Medicine.

“If you’re a resident looking to go into transplant surgery, and they’re really competitive, they're going to look for a transplant program that does living liver donor transplants,” said Kubal. “Having the chance to work for two years in a living donor program gives them an advantage of knowing this type of procedure well and makes it easier for them to be recruited earlier into their careers.”

The program has already proven to be a successful viable program.

With a program like this there is no limit to how many patients we can help,” said Kubal. “With deceased donors, you're depending on the organ supply and then we have to follow the regulations in terms of which patients can receive them.”

Donor safety is the top most priority for Kubal and the transplant team.

“The operation is challenging and complicated, but at every step we ensure donor safety,” Kubal said. “Donor safety is the most important thing … because these are healthy individuals undergoing a major operation for a selfless reason, an operation they don’t need.”

Since starting the program, the IU Health transplant surgeons have done six procedures and expect to do up to 15 to 20 of these procedures a year.

According to IU Health, living liver donation involves removing a portion of a donor’s liver to replace a recipient’s diseased liver in an eight-hour surgery. The living liver donor faces all the same risks of a major surgery. The remnant liver retains full function and regenerates to full size within 6-12 weeks.