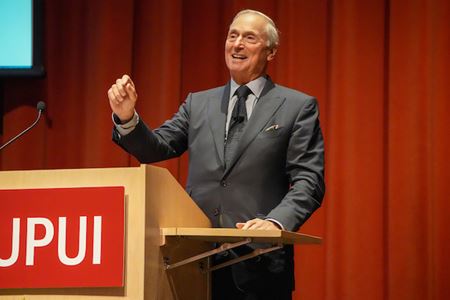 Robert I. Grossman, MD, chief executive officer of NYU Langone Health and dean of NYU School of Medicine, sees the field of medicine as the “caboose” of the leadership train. Business and political organizations have long understood the value of leadership education, but medicine is just catching up.

“Medicine never developed leaders,” Grossman asserted during a lecture at Indiana University School of Medicine on September 8. “Throughout the vast majority of my career, there was zero emphasis on leadership training.”

As an internationally renowned, award-winning medical innovator, Grossman was a natural choice for the lectureship’s inaugural speaker. 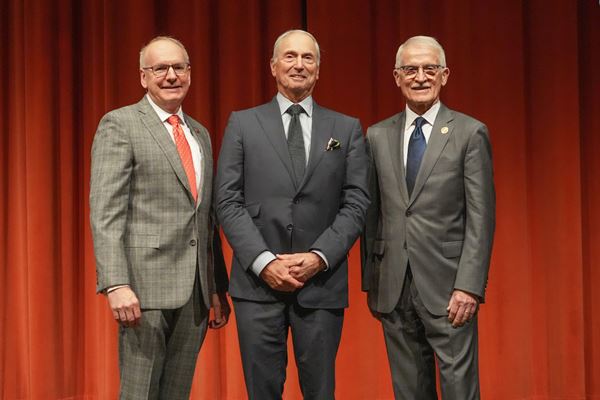 “Leaders are visionary—they have bigger eyes than the average person,” Grossman said. “They are audacious, and they are risk takers. They see things differently.”

At NYU Grossman School of Medicine—renamed in his honor in 2019—Grossman recently led the unprecedented initiative of providing tuition-free medical education for all current and future students in the MD program. Also under his leadership, NYU Langone has increased research funding from the National Institutes of Health (NIH) by more than 532 percent since 2007, making NYU Langone the No. 1 recipient of NIH funding in the United States. In 2018, Grossman was named to Time magazine’s inaugural Health Care 50 list of the most influential health care leaders who have changed the state of health care in America.

To Grossman, leaders are “born” but also need development. In a second-grade class photo, young Grossman is the only child wearing stripes rather than a collared white shirt. That boldness has served him well as leader of a top-ranked hospital system and medical school.

As leader of NYU Langone, Grossman recounted four crises he’s had to manage: 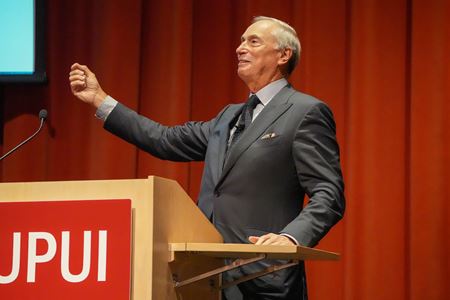 Grossman’s advice for leading through a crisis includes getting all the details needed to make a decision, thinking long-term—and expecting criticism.

When asked how a leader can know if a decision is right, Grossman replied simply, “You don’t.”

“If you’re going to be a good leader, you can’t be afraid of failing,” he said.

While leadership takes vision, it also takes humility and self-awareness, Grossman said. He quoted famed basketball coach John Wooden: “It’s what you learn after you know it all that counts.”

Grossman is a voracious reader and would question the leadership of anyone who isn’t (see his reading list below). He gleans wisdom from an eclectic group of iconic leaders including Dwight D. Eisenhower, Winston Churchill, Ulysses S. Grant, the Dalai Lama and biblical King David. For a current example of leadership, he points to Ukrainian President Volodymyr Zelenskyy, saying, “You know it when you see it.”

Successful leaders can be identified by common characteristics. Grossman ranks the top four as humility, metacognition (self-awareness), courage, and adhering to core values and principles. Contrary to popular belief, leaders are “human” and often are moved by empathy for others, he added.

What they are not is indecisive.

“Leaders are really good listeners, but as a leader, you’re going to have to make the final decision,” Grossman said. “If you make a mistake, own it, redirect it and move on.”

As he sees it, the best leadership style is “adaptive.”

“You are very disruptive. You are flying on the edge of chaos, but you are creating incredible opportunities and, at times, doing things that are amazing,” said Grossman, speaking from his experience as an innovator in medical care and academic medicine. “You have to be audacious but also be able to execute.” 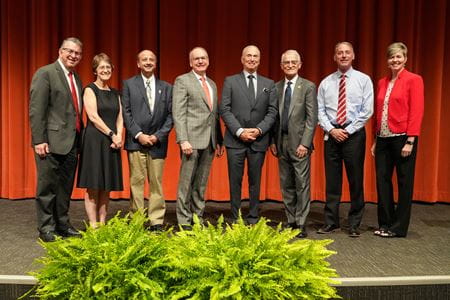 IU School of Medicine Dean Jay L. Hess, MD, PhD, MHSA, has taken leadership inspiration from Grossman for years and was excited to bring him to Indianapolis.

“Dr. Grossman has been very influential to me personally and professionally, particularly his focus on using data to drive decision making and accountability,” Hess said. “I am pleased that so many in our school community could hear and learn about his aspirational approach to leadership.”