The importance of glaucoma research and education 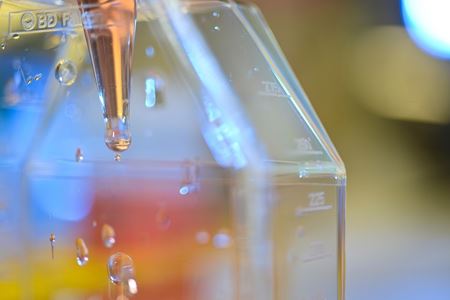 Twelve million people are expected to be diagnosed with glaucoma in 2020, raising the total number of cases to 76 million according to the American Academy of Ophthalmology (AAO).

This means research and education in the area of glaucoma—an age-related condition in which high pressure from fluids within the eye causes irreversible damage to the optic nerve, often leading to blindness—is more important than ever.

Lind is a glaucoma specialist, who has spent 10 years treating those who suffer from this devastating disease. Pattabiraman focuses his research on glaucoma, striving to find a cure for it.

Pattabiraman’s Lab in the Eugene and Marilyn Glick Eye Institute strives to gain a better understanding of what causes glaucoma as well as the racial disparities tied to it. He said he is passionate about this area of study because it poses a considerable health challenge, given the world’s aging population.

The predicted increase in glaucoma cases in coming years is staggering considering the impact it would have on quality of life for people across the globe and the economic burdens it would create for governments—and taxpayers—trying to care for citizens, Pattabiraman said.

“Finding a cure and alleviating pain are the major inspirations to work on these areas,” he said.

Glaucoma is already the second leading cause of blindness worldwide. The number of cases is expected to continue rising past 2020, climbing to more than 111 million in 2040, with African and Asian populations being more heavily impacted, according to the AAO.

About 2 to 4 percent of the U.S. population currently suffers from glaucoma. It is most common in those older than 40 and people of color, particularly African–Americans.

There is no cure for the disease, and managing it can be difficult as early symptoms of glaucoma often go unnoticed. Typically, pressure on the optic nerve robs a person of their peripheral vision before moving toward the center eye. Patchy, blurred or tunnel vision is common.

Medical students who rotate through the ophthalmology department often have the opportunity to learn from its three glaucoma specialists—Lind, Louis Cantor, MD, and Elizabeth Martin, MD—and learn about glaucoma diagnosis and treatments though clinical visits and operating room surgeries.

Nearly all students will spend one week of their rotation with these doctors in learning compassionate care of the glaucoma patient, Lind said.

Pattabiraman said he and his researchers strongly believe that primary open-angle glaucoma, or POAG—the most common form of the disease—is a combination of a biochemical and biomechanical problems within the aqueous humor drainage pathway. But ensuring the pathway is unblocked and working properly would decrease elevated intraocular pressure, therefore decreasing the risk of glaucoma.

Aqueous humor is a watery, plasma-like fluid produced within the eye which helps to nourish and cleanse the anterior portion of the eye. It’s drained predominantly through a tiny tissue called a trabecular meshwork that runs 360 degrees around the eye, Pattabiraman said.

The Pattabiraman Lab is studying the molecular mechanisms involved in achieving the homeostasis in intraocular pressure and what goes wrong with the signaling that leads to a dyshomeostasis. Researchers are also interested in understanding the racial disparity of glaucoma, as the disease is about four times as common in African–Americans compared to Caucasians, according to the AAO.

Regular eye exams are an important tool in preventing glaucoma, and a comprehensive eye exam is needed to make a diagnosis, because nearly half of those diagnosed with glaucoma can have normal eye pressure at presentation, Lind said.

But glaucoma is a disease of deterioration of the optic nerve, he said; and during an exam, ophthalmologist can test vision, measure eye pressure and evaluate the ocular nerve to ensure its healthy or spot changes to the optic nerve and developments of visual field defects that are consistent with those seen in glaucoma. This may indicate glaucoma or worsening disease, he said.

Special tests such as gonioscopy, pachymetry, visual field testing, stereo nerve photographs and optical coherence tomography (OCT) are all elements of a specialized exam that can aid the clinician in diagnosing and following the development of glaucoma, Lind said.

“Many times, patients are diagnosed and afraid if they hear the word glaucoma,” he said. “Unfortunately, people still go blind from glaucoma today. However, with proper management and compliance, most glaucoma can be treated with eye drops and laser treatment. Some patients will require surgery to lower pressure.”

IU School of Medicine is a leader among public universities in ophthalmic research, particularly in the exploration and treatment of glaucoma as well as age-related macular degeneration (AMD), diabetic retinopathy and pediatric eye diseases.