Saying goodbye to ‘the heart of GME’ 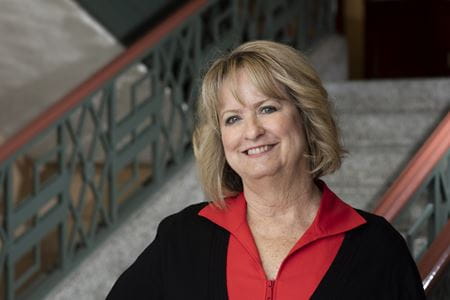 Looking around her office in Fesler Hall, full of half-packed boxes and more than 30 years of memories from her time at Indiana University School of Medicine, Linda Bratcher was still coming to terms with her looming retirement.

“It’s really hard to walk away. Not just from the people—of course that part is hard. But from the work as well,” said Bratcher, whose last day is Thursday, February 28. “I will miss contributing to something that I feel is for the greater good. And that’s what bothers me about being retired.”

For Bratcher, who has been with the school for three decades, her last role as director of Graduate Medical Education has been the capstone on a career that, as a teen growing up in Indianapolis, seemed unlikely.

“I remember when I was in high school I had pretty humble aspirations. I always thought I would like to be a legal secretary or a medical secretary, because I do enjoy being of service,” Bratcher said. “I started my family when I was pretty young. I went to business school, and I thought that was going to be my choice of careers when I went back to work.”

Serving in various clerical jobs in Indianapolis as a young mother, Bratcher said a job with Meridian Medical Group opened her eyes to a different line of work—one that she found to be exciting and intriguing.

“It was a medical transcription job. I realized how interested I was in medicine. Of course, I thought I had every disease in the book while I had that job—I thought, ‘Oh I do think my hair is falling out, I am feeling fatigued,’” Bratcher laughed. “I found that job to be very interesting, but I missed interacting with people. So I started looking around in the health-care field.”

That search led her to Wishard Hospital, where she spent a year as an administrator in internal medicine before moving over to IU School of Medicine. Shortly after, however, her youngest child was born, so she spent five years at home with her family—working consulting jobs and caring for her children, Jim, Jodi and Stacey, until 1980, when she returned to Wishard to work for the division chief in internal medicine.

She worked in that role for Joseph Mamlin, MD, for six years, until 1986, when the arrival of a future IU School of Medicine dean changed the course of her career.

Craig Brater, MD, joined the school of medicine to start the new division of clinical pharmacology. By that time, Bratcher said, she had completed her bachelor’s degree in business, and was ready for a new challenge. When Brater asked if she would like to be his administrator at the launch of the new division, she jumped at the chance.

“That was an exciting thing to do,” Bratcher said. “It was an entirely new skillset that I had to learn. I was a one-stop-shop, so I had to do everything.”

As Brater’s role with the school progressed, so did Bratcher’s. Shortly after Brater was named Department of Medicine chair, he called on Bratcher again.

“That year, the residency program in the Department of Medicine didn’t match. Dr. Brater decided he needed to revamp the way things were structured,” said Bratcher. “So in 1991, he asked if I would be interested in taking the role of administrator for the residency program.”

For Brater, who would go on to serve as dean of the IU School of Medicine from 2000 to 2013, he saw Bratcher as a perfect fit for the residency role. Touting her abilities as an administrator, Brater asserted that what made Bratcher the ideal candidate were the less tangible aspects of her character.

“Linda was my first thought for this position for a couple reasons. She is good at what she does from a technical and administrative perspective. But she’s also such a people person,” Brater said. “In those residency programs, the person in that role is dealing with all sorts of stuff that comes up, including being a true caregiver to a lot of young adults. I knew her personality would be great for that.”

As residents navigated through what Brater characterized as a tumultuous time in their professional lives, Bratcher’s capacity for care was rivaled only by her ability to keep the program running like a well-oiled machine.

“She learns exactly what needs to be done, and dots all the i’s and crosses all the t’s. That kind of thing is absolutely necessary in these training programs. Literally, your accreditation depends on it,” Brater said. “And you can find lots of people who can dot a lot of i’s, and cross a lot of t’s. But, they do not have that personal dimension. Linda was, and is, the whole deal. She’s one of those people who, when they walk into a room, brings a smile to everybody’s face. And that’s what she did for all those residents she worked with.”

Bratcher served in the residency role for 10 years, until 2001, when her husband, Rick, retired from United Parcel Service. Bratcher reluctantly joined him in retirement—a break that proved to be short-lived. After eight months of being at home, Bratcher accepted an offer to return to work at the Richard L. Roudebush Indianapolis VA Medical Center in health research and development. She was in that role for three years, when in 2004 she was recruited by Nancy Baxter to return to IU School of Medicine to serve as internal review coordinator for the office of GME.

A time to lead

In 2010, Baxter retired from the position of GME director, and Bratcher applied for the job. Even then, after decades of experience with the school, achieving this goal came as a surprise for Bratcher.

“When I was in my role of coordinator I would interact with Nancy, and she was always someone I admired. Never did I dream that I would be in that position. Honestly, I still pinch myself sometimes,” Bratcher said. “I feel so fortunate. I’ve worked hard, but I also think that sometimes you have to be in the right place at the right time.”

According to Michelle Howenstine, MD, however, there is much more to Bratcher’s success than luck. For Howenstine, senior associate dean for GME and continuing medical education, watching Bratcher operate in her role as director has been a lesson in leadership.

“She is truly a team leader. She guides and watches out for each GME member,” Howenstine said. “Team cohesiveness and engagement are important to her and have made the GME office a successful unit.”

Allowing members of her team to develop professionally has been a hallmark of Bratcher’s time as GME director. Attributing much of her success to the mentorship she experienced through her career, Bratcher said allowing people room to grow and learn is crucial in sustaining the vitality of any department.

Also crucial, Bratcher said, is looking out for the best interests of the many residents scattered throughout the school’s departments. With more than 1,150 residents and fellows at IU School of Medicine, Bratcher said the one regrettable reality is the impossibility of getting to know many of them on an individual basis—with contact too often coming when something has gone wrong.

Approaching those situations with a sense of compassion and understanding has always been important for Bratcher. And never was that approach more needed than in the wake of a resident’s suicide—an occurrence that, tragically, Bratcher has an all-too-real frame of reference for.

In 2003, Bratcher lost her son Jim to suicide. Years later, Bratcher said that helping another mother grieve brought a new sense of meaning to her experience.

“I was able to connect with the mother. I was able to help her with pain. I always thought God allowed this to happen in my life so I would be able to help somebody else,” Bratcher said, adding that the support of coworkers at the time of her son’s death was invaluable. “I was so thankful to have a job to come back to, to have a family at work to lean on. I needed that outlet.”

Through the ups and downs of a long career at IU, that family-atmosphere has been a constant for Bratcher. In the waning days of her time as director, Bratcher took stock of the career behind her, and the future that lies ahead.

“To some extent my work is my identity. I’m appreciated here, and needed,” Bratcher said. “Now I guess it’s time to find a new identity for myself.”

The identity of the office she leaves behind, however, is fundamentally strengthened by her influence.

“I have been honored to work with Linda, and be able to observe her dedication, loyalty and love of life on a daily basis,” Howenstine said. “As I have said many times, Linda is the heart of GME, and I truly believe that all she has brought us will remain as essentials of our office for years to come.”