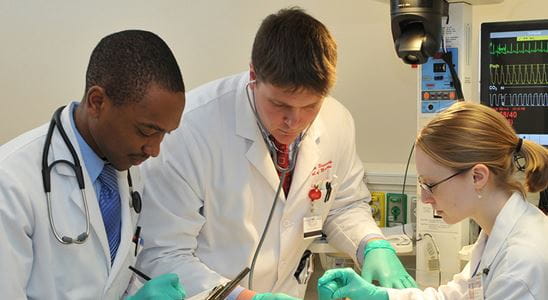 It’s a dangerous condition that, while rare, is the leading cause of maternal deaths around the world, including here in Indiana.

Amniotic fluid embolism (AFE) is a serious complication in pregnant women and can threaten the lives of both the mother and baby. It happens when the mother has an allergic-like reaction to amniotic fluid getting into her circulatory system and occurs most often before, during or soon after delivery. When a mother has this severe reaction to the fluid, they first suffer from rapid respiratory failure and cardiac arrest and then heavy bleeding. Indiana University School of Medicine Department of Obstetrics and Gynecology faculty member Mary Abernathy, MD, who also serves as chair of the Indiana Maternal Mortality Review Committee, answers some questions about how this dangerous reaction is impacting women all over the world.

Amniotic fluid embolism, or AFE, is an uncommon cause of maternal mortality. We used to think that AFE was caused by an embolism of fetal cells from the amniotic fluid getting into the maternal circulation and plugging up the small arterioles in the lungs as the blood passed through. If enough fetal cells entered the maternal circulation, then it would cause massive cardiac pulmonary arrest by essentially plugging up the arterioles and the lungs could no longer support oxygenation of the blood.

We now know that AFE is most likely an anaphylactoid, or massive allergic response, from the mother in response to the fetal cells somehow entering the maternal circulation. These cells begin a rapid cascade of maternal decompensation with sudden maternal cardiopulmonary collapse and hemorrhage due to rapid onset coagulopathy (inability to form a blood clot) and death.

How is AFE diagnosed?

There is no one test that can determine if a mother has experienced an AFE. The fact that it happens suddenly and without warning makes the diagnosis ever more difficult. We have lacked a uniform way to diagnose AFE and it is usually a diagnosis of exclusion, meaning that all other causes have been eliminated. Other causes of maternal death related to sudden cardiopulmonary collapse include severe hemorrhage, sepsis, pulmonary thromboembolism, anesthesia complications and a systemic anaphylaxis from medications. There is recent literature in the American Journal of Obstetrics and Gynecology that suggests we need to use uniform diagnostic criteria to be sure we don’t over diagnose or miss any maternal deaths from AFE. The proposed criteria include:

How common is it in Indiana, the United States and around the world?

AFE is very uncommon and the concern is the lack of ability to predict and sometimes diagnose the condition. Since we have not had a uniform way to diagnose the condition, the actual incidence is uncertain. The AFE Foundation estimates that it occurs in one in every 40,000 deliveries in North America and about one in every 53,800 deliveries in Europe. This estimate is further complicated by the fact that many states have not, until recently, had Maternal Mortality Review Committees to review each maternal mortality in their district or state. Indiana formed a Maternal Mortality Review Committee in 2018 and they have been active in reviewing the cases of maternal deaths in Indiana. Statistically, since we have about 80,000 births annually in Indiana, we might have two cases each year.

How likely are mothers to survive AFE?

We are not entirely sure. The estimates of survival vary greatly because of the inability to have an accurate diagnosis. The chance of a woman surviving an AFE is increased with rapid recognition and response. The chance of a women dying due to an AFE can be as high as 80 percent, although more recently it has been estimated to be closer to a 40 percent risk of death.

What happens to the baby when a mother experiences AFE?

Why is raising awareness for AFE important?

Raising awareness of AFE as a cause of maternal death is important because if AFE can be suspected or detected early in the condition it can improve the chance of survival for the mother and the infant. A hospital or delivery center must be capable of performing CPR and if feasible a rapid delivery to save the undelivered infant. By increasing overall awareness, we are hoping to increase survival of mothers experiencing AFE. This will decrease maternal mortality related to AFE.