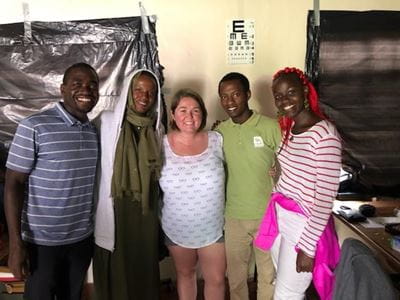 April Jones, MD, (center) poses for a photo with volunteers in Kenya.

It’s what led her to be an optometrist in the first place and what she loves most about her job. Every day she meets people in need and is able to help them, to bring relief to the fear and anxiety they might have about vision problems they’re experiencing.

Sometimes that calling takes her across the world, where she’s able to assist those less fortunate.

Jones, an optometrist and assistant professor of clinical ophthalmology in the Indiana University School of Medicine Department of Ophthalmology, recently returned from a volunteer trip to Africa with an international nonprofit organization dedicated to helping those with limited access to eye care.

The group, Volunteer Optometric Services to Humanity, or VOSH, is a non-governmental organization founded in 1971 that relies on the goodwill of its physician-members to operate clinics on mission trips around the globe, according to its website.

Chapters of VOSH regularly travel to parts of the world where residents don’t receive consistent eye care due to financial constraints, lack of transportation or an insufficient number of local doctors, Jones said.

At the end of last year, Jones traveled with seven other doctors from VOSH-Indiana to Nairobi, Kenya and spent several days working in a makeshift clinic that the organization set up in what’s usually a learning center near one of the country’s largest slums.

This part of Nairobi is in desperate need of free help from qualified doctors, Jones said, and it was emotional to see just how many people needed their assistance.

In the four days the VOSH clinic was up and running, the doctors saw about 1,700 patients. People were lined up outside from 7:30 am until well after the clinic’s 2 pm closing time; the doctors stayed on later to ensure each patient was seen, she said.

Kenya has a private health care system; but insurance usually falls outside what must Kenyans can afford, as the poorest families there often live on only $30 a month, Jones said. Those who can afford insurance often struggle to cover their copays. Others don’t have the means to get to one of the two hospitals in Nairobi they’d need to visit to receive treatment.

So many people end up going without, Jones said.

The patients seen by VOSH-Indiana’s doctors admitted they’d walked for hours to get free help from the organization, she said. Some had eye injuries that had gone untreated for years, and it was rewarding to finally bring them some relief.

VOSH chapters rely heavily on donated eyeglasses collected through the Lions Clubs International eyeglasses recycling program to make their efforts a reality, according to the VOSH website. Jones said the group from Indiana took these donated glasses to Africa to aid the patients they encountered in Kenya.

The trek to Africa was Jones’ second trip with VOSH. A few years ago, she visited Grenada with the organization. That island in the Caribbean Sea lacked enough qualified doctors to properly care for residents there.

The same calling to help that led Jones to optometry, led her to join VOSH, she said.

Helping those less fortunate is the duty of those with the resources to spare, Jones said. If people, if countries and organizations, have the means to give back, they should. And she’s proud to work with a group like VOSH to ensure this important work is done.

“To live in the world with so much technology, it’s unbelievable that there are people who can’t see just because they need glasses,” Jones said. “I feel extremely lucky that I could help so many people in such a meaningful way.  I can’t wait for my next trip.”