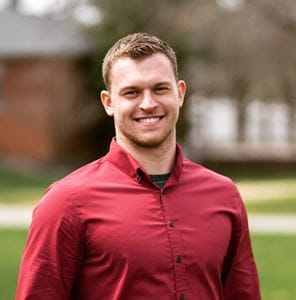 Adam Ferrari was going to be a personal trainer. At least that was the plan when he started his undergraduate work at the University of Southern Indiana. He enjoyed playing sports and being athletic, thus an exercise science major seemed like the perfect fit.

Ferrari was 7 when he was diagnosed with acute lymphoblastic leukemia. He underwent about 2½ years of chemotherapy as treatment. Once he was in remission, he tried to put the experience behind him. He spent his childhood—the years he wasn’t in the hospital hooked up to machines undergoing chemotherapy—focused on being a kid and catching up on the years he’d missed. He went through middle and high school trying his best not to think of that time. He entered college focused on following his love of sports with a career as a personal trainer.

But it all changed one afternoon. While rummaging through some old boxes at his parents’ home in Evansville, Ferrari discovered his path to becoming a researcher, one with a focus in cancer like the one he’d once suffered from in his youth. That was about six years ago. Since then Ferrari has invested countless hours studying the effects of a novel bone-targeted Notch inhibitor on the growth of multiple myeloma cancer cells in the bone marrow and the associated bone destruction. He is one of the two students this year who earned the Charles H. Turner Young Investigator Bone Research Award, a scholarship presented by Indiana University School of Medicine Department of Orthopaedic Surgery in memory of Charles Turner, PhD, who was a professor and the department’s chair of orthopaedic research. The award is gifted annually to help students pay to attend one of two medical conferences for young researchers.

The folder Ferrari unearthed years ago was filled with copies of old treatment plans and charts from his years as a cancer patient. As a child, he wouldn’t have understood what was written on them; but as a sophomore in college with a budding interest in science, he was fascinated.

But finding that old folder changed everything, Ferrari said. It inspired him. He knew from that moment he wanted to be part of the pediatric oncology community and to study cancer treatments. Ferrari changed his major and went on to graduate from University of Southern Indiana with a bachelor’s degree in biochemistry. Now, he’s a master’s student working on his thesis research under the supervision of Jesus Delgado-Calle, PhD, in the IU School of Medicine Division of Hematology and Oncology.

In Delgado-Calle’s lab, Ferrari studies the effects of a cancer similar to the one he fought. He hopes his research will improve the understanding of the role of Notch signaling in multiple myeloma progression and provide new avenues to stop multiple myeloma growth and its deleterious effects on bone health. Ferrari said Delgado-Calle encouraged him to apply for the Charles H. Turner Young Investigator Bone Research Award. He sees the trip to the medical conference that the grant dollars provide as an incredible opportunity to immerse himself in science and network with exceptional minds within the field.

That’s the goal of the Charles H. Turner Young Investigator Bone Research Award. Turner, a professor who died in 2010, was an internationally recognized scientist and engineer. The grant named in his honor was created in 2011 with the goal of celebrating Turner’s legacy and scientific contributions while furthering the education of IU School of Medicine trainees at all levels, from undergraduate health professions students to postdoctoral fellows and residents.