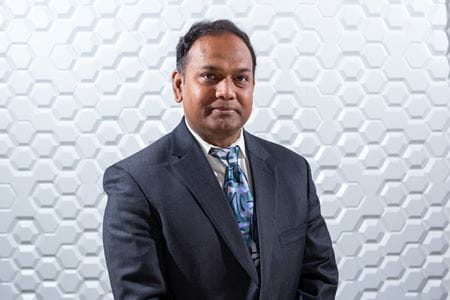 Chandan K. Sen, PhD, wears many hats throughout the Indiana University system. At IU School of Medicine, he is the J. Stanley Battersby Chair Professor of Surgery. He serves as Associate Dean of Research and is the Director of the Indiana Center for Regenerative Medicine and Engineering. At IU, Sen serves as Associate Vice President of Research, and at IU Health is the Executive Director of the Comprehensive Wound Center.

Taking part in so many aspects of the university, it comes as no surprise that he has been honored with one of IU’s highest honors: appointed one of IU’s 2020 distinguished professors.

“Faculty honored with the title of the distinguished professor—a title reserved for only the most highly acclaimed and accomplished IU faculty—truly are among the finest scholars and researchers in the world,” IU President Michael A. McRobbie said. “This prestigious appointment celebrates those who have earned national and international recognition and who have strengthened and transformed their fields of study through their research, scholarship, innovation, and creative contributions to the world. They were chosen from the largest and best pool of candidates in IU’s history.”

This award is a high honor for those who receive it, but for Sen it also comes with a sense of responsibility to IU.

“I feel highly rewarded, honored, and humbled, but should I have not received this award I would still keep doing what I’m doing,” said Sen. “But now that I have received this honor, I feel an additional responsibility. I feel responsible for looking at myself in the mirror and responding to this honor by even further improving myself and bringing more value to the community around me.”

When Sen came to IU School of Medicine, IU pledged $20 million over five years to establish a new Indiana Center for Regenerative Medicine and Engineering, with Sen as its first director. Along with Sen, leaders like Gayle Gordillo, MD, the Dr. Sanford and Thelma E. Glanz Professor of Plastic and Reconstructive Surgery, and the division chief for plastic surgery as well as 30 more scientists joined the school’s research workforce.

Since then, the program has expanded and now includes the IU Health Comprehensive Wound Care Center, which opened in January of 2020.

“This where our trained staff and our vision of taking new science to benefit people will be implemented,” said Sen. “Where science and care would meet to improve people’s lives through education, research and care.”

One of the other aspects of regenerative medicine that has grown since the arrival of Sen is the creation of patents and the commercialization of the science they are creating to help patients in need.

“During the last year, we have a dozen or so new patents that have been developed here at IU, and not only do we have patents, but we also have companies wanting to license them and offering licensing revenues,” said Sen. “I see this as an important support system of the future where scientific solutions are not just conceptual or on paper, but they are productized, and then they’re taken to market, which then ends up helping people.”

Sen is driven by the need to help those who suffer and to create a cost-effective treatment that can be used at a low cost to individuals.

“Anything that puts a smile on the face of patients is gratifying, and that day takes years to achieve,” said Sen. “When it happens, it feels good to know that it was something that we developed that will now help millions, and save lives, because we are humans first and scientists second.”

Sen also recognizes that all of the efforts are not made by himself, but many individuals who have helped him get where he is today.

“I’d like to thank all the experts that have reviewed me and have placed their trust in me. I like to tell them that this makes a big difference, and it is clearly an inspiration for me,” said Sen. “I would also like to thank all of my colleagues and family because without them I would not have been able to accomplish this, because any good impact needs a terrific team behind it.”