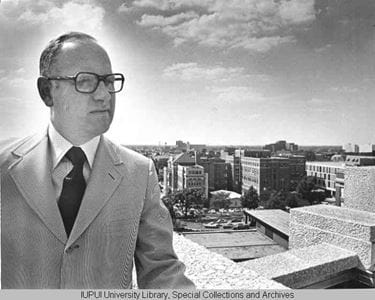 He was the doctor for NASA’s early astronauts. As dean of Indiana University School of Medicine, he devised a statewide medical education system. As president of Purdue University, he oversaw ambitious construction initiatives and promoted diversity.

For almost 30 years, Dr. Steven C. Beering was a giant in Indiana higher education. Beering, who passed away on April 4, 2020, at the age of 87, leaves behind a legacy that has served as inspiration for those who have followed in his footsteps.

"When you look back at Dr. Beering's life story—the harrowing adversity he faced as a young boy in Nazi Germany and the significance of his impact as a trailblazer in Hoosier academia—you can't help but be humbled," said Jay L. Hess, MD, PhD, MHSA, dean of IU School of Medicine and IU's executive vice president for university clinical affairs.

Beering was born August 20, 1933, in Berlin and spent most of his early years in Hamburg, where his father, Stephen, managed two retail furniture stores before World War II. As the Allies rained bombs on Hamburg, he and his mother, Alice, and younger brother, John, sheltered with neighbors in their basement. A four-day raid in July 1943 set off firestorms and claimed 77,000 civilian casualties. It also destroyed their home, and left a million residents homeless.

The boys and their mother were sent to work on a farm labor camp south of Nuremburg while their father in Berlin feared them dead. It would be years before he tracked them down, with the aid of the American Red Cross.

Beering was just 11 when he was taken to the camp. The war and its aftermath interrupted several years of his schooling, but his mother, a French nurse, home-schooled her sons as much as possible. After the war, the family returned briefly to Hamburg, before moving to London, and then New York City.

“My father, my brother and I were standing at the railing of the ship as it came into the harbor,” Beering said in an interview. “It was early in the morning, and there was this fog. The mist parted, and there was a shaft of sunlight that hit the statue just as we were coming up to the Ellis Island area. It was magic, absolutely magic, just like in a movie. And my father said, ‘There she is, the Statue of Liberty. Never forget this moment. This is the signal to you to make something out of yourself.”

Pursuing a future in medicine

The family eventually settled in Pittsburgh, where Beering dedicated himself to pursuing a future as a physician.

“I wanted to make a difference and help people, and I wanted to go into medicine,” Beering said. “I had seen so much disease and problems during the war years.”

Beering enrolled at the University of Pittsburgh, where he met Jane Pickering, who would become his wife. Graduating in 1954, he stayed on at Pittsburgh for medical school, receiving his MD in 1958. He worked his way through the undergraduate years with the help of scholarships and income earned teaching French and German at Pitt. For medical school, he received a Mellon Fellowship, a full scholarship. Citing that financial assistance as instrumental to his future, Beering later raised private funds for the Beering Scholarships at Purdue—an endowment that covers all educational expenses for a bachelor’s degree and the opportunity to pursue two other graduate degrees at Purdue and a medical degree at IU School of Medicine. A similar scholarship was also established by the Beerings at Pittsburgh.

He spent 12 years in the Air Force Medical Corps, rising steadily in the ranks to become a lieutenant colonel and chief of internal medicine at Lackland Air Force Base in San Antonio, Texas. There, he served on the medical support teams for the Mercury, Gemini and Apollo space programs, and his research into hormonal changes that occur in the body as a result of environmental stress was particularly relevant to the early space program.

Contemplating an end to his career in the military, Beering received an entreaty from former Department of Medicine chair John Hickam. Hickam, who had worked with Beering as a consultant to the Air Force, had hopes on bringing him to Indiana.

“He said to me one day when he visited in Texas, ‘when you ever get to the point where you want to hang up the blue suit, before you go anywhere else, please call me at Indiana. We’d love to continue our professional association and have you join the staff of the IU medical school,” Beering recounted in a 2000 interview.

“In December of 1968 … Herman Wells signed my letter of appointment. … What a grand gentleman he was. And John Hickam. Giants among men. Extraordinary human beings. … I look back over my modest career, (I think) the people that I have been able to encounter and work with have really been the most significant experiences.”

During his time at IU School of Medicine, it was Beering’s contribution that was significant. Joining the faculty in 1969 as a professor of medicine and assistant dean, Beering was named dean of IU School of Medicine in 1974—the youngest person to serve in that post. Among his many contributions to the school and the state was his leadership in establishing the Indiana Statewide Medical Education System—creating community-based regional centers for medical education in Evansville, Fort Wayne, Gary, Lafayette, Muncie, South Bend and Terre Haute. Also during his tenure, the number of endowed chairs at IU School of Medicine grew from three to 34. 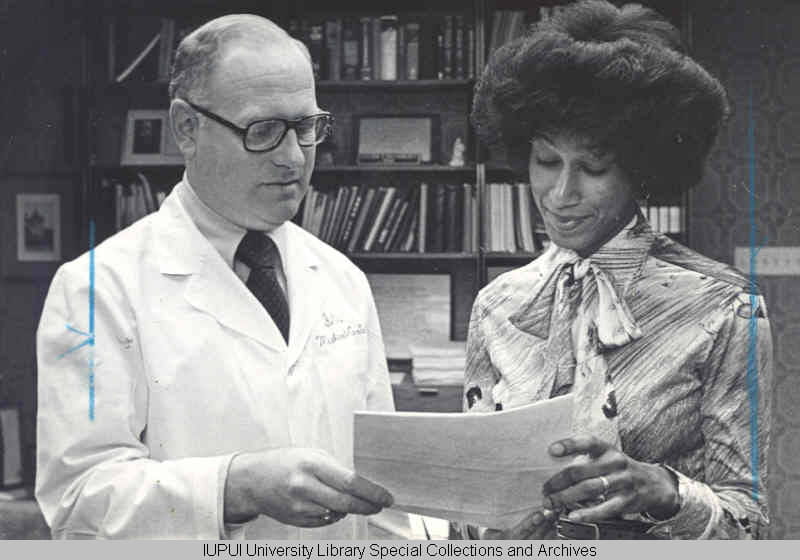 "IU and Hoosiers across the state will forever be grateful to him for designing Indiana's bold and visionary statewide medical education system,” said IU President Michael A. McRobbie. “This system, which has since been widely replicated nationwide, extended the high-quality education and research of the IU School of Medicine to all corners of the state and ensured that many of the school's graduates would practice medicine here in Indiana.”

Trading cream and crimson for black and gold

During his tenure as dean, Beering also served as director of the IU Medical Center. He served in those roles until 1983, when he was selected as the ninth president of Purdue University—serving in that role until his retirement in 2000. Construction projects abounded during his 17 years with Purdue, with 20 major buildings going up in his tenure and the creation of a master plan that transformed the campus into a pedestrian-friendly facility. Beering also saw enrollment of international students grow threefold in his time with Purdue—the largest at any public university.

"Dr. Beering's fingerprints are on so much of what we pride ourselves on at IU School of Medicine—a statewide medical education system being just one of his many accomplishments,” Hess said. “The wisdom and integrity with which he led for decades, first here at IU and later at Purdue, serve as a compass for all those who followed in his footsteps."

A legacy to remember

In 1983, IU School of Medicine established the Steven C. Beering Award to honor internationally recognized individuals for outstanding research contributions to the advancement of biomedical or clinical science. The award is presented annually and consists of a medal and a $25,000 prize. Eight Beering award recipients also received Nobel Prizes, either before or after receiving the Beering award.

Beering received IU's President's Medal for Excellence, the highest honor an IU president can bestow, in 1999. In 2016, IU recognized his commitment to medical and higher education by renaming the medical education wing at the IU School of Medicine–West Lafayette campus the Steven C. Beering Medical Education Wing.

“Be open to new opportunities. Be broadly gauged. Be outer-directed. Don’t give up on the hard work of educating a student to the need to be an extraordinarily well-trained scientist, because that’s the future of medicine,” Beering said, when asked what advice he would give to today’s IU School of Medicine leadership.

“It’s not enough anymore to be a caring, thoughtful physician. You have to be a scientist as well. … turning out physician-scientists for the future.”

Dr. Steven C. Beering passed away on April 4, 2020, at the age of 87. Due to the COVID-19 pandemic, there will not be immediate services. A celebration of life is planned for the future when conditions allow.