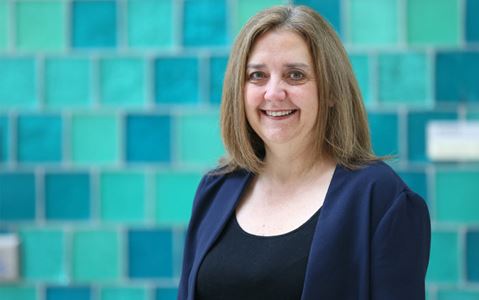 Elaine Cox, MD, Chief Medical Officer for Riley Children’s Health at IU Health and professor of clinical pediatrics at Indiana University School of Medicine, has dedicated her career to advancing care in the areas of HIV, infections related to cardiovascular surgery, infection prevention and antimicrobial stewardship. Cox’s wisdom, persistence and passion have guided her throughout her journey.

“Dr. Elaine Cox has moved through the ranks, embracing the risks that come with stepping into significant leadership roles. She has shaped the lives of thousands through her advocacy and work in HIV and infectious disease prevention. Dr. Cox has many more trailblazing years ahead of her in her career,” said Mary Dankoski, PhD, Executive Associate Dean for Faculty Affairs, Professional Development and Diversity.

At a young age Cox knew she wanted to become a doctor, and her mother was very supportive. Cox’s mother would introduce her saying, “This is my daughter, Elaine. She’s going to be a doctor.”

A Hoosier through and through, Cox earned her bachelor’s degree at Indiana University in 1986 and her medical degree from IU School of Medicine in 1990 and completed her pediatric residency with IU Health in 1993. However, Cox and her husband relocated to Ohio where Cox joined a private practice, Marysville Pediatrics, for a few years.

In 1995, they returned to Indiana, though Cox was unsure what was next regarding her career. Fortunately, her mentor, Martin Kleinman, MD, asked her to join the team at Riley Hospital for Children and the IU School of Medicine Department of Pediatrics. Kleinman placed her with pediatric infectious diseases, specifically working with pediatric HIV patients.

“As a medical student, I witnessed first-hand the medical treatment of Ryan White, an American teenager from Kokomo, Indiana, who became a poster child for HIV and AIDS. I admired the work of Ryan’s doctors, and wanted to provide the best care possible,” said Cox.

Working during a time when the understanding of HIV and its treatment were rapidly evolving, her determination was inspired by her patients as she pleaded to the state legislature in favor of preventative measures regarding transmission from mother to child. Cox quickly learned that everyone did not think like a clinician, so she built relationships across the political aisle to better understand differing perspectives and concerns. These relationships resulted in a more holistic perspective of HIV policy impacting the lives of many Americans.

Cox was surrounded by great faculty who supported and believed in one another, including Kleinman and Ora Pescovitz, MD, the first president of Riley Children’s Hospital. On many occasions, they would place her in opportunities where she would excel.

Cox learned the tenets of change management to start meaningful programs and help patients progress. With her new knowledge came more opportunities in, infection prevention. She needed to work across the hospital to advance these efforts, and become an effective health care leader.

“Physician leaders have to prove themselves twice, first as a clinician and then as a leader. Know where people are, then meet them just a little beyond that to keep them moving forward,” said Cox.

In 2014, Cox was placed on the IU Health System task force during the Ebola outbreak and the National Emergency Response System for Ebola. Cox gained confidence in decision-making. She knew her decisions were going to be challenged, but learned how to effectively explain her reasoning.

In 2016, Jeff Sperring, MD, current president of Riley Hospital for Children, asked Cox to become co-service chief of the cardiovascular service line, a newly created position at the time. Many members confronted Cox about her experience in the cardiovascular field, some going as far as to say someone else should be in the role. However, she persisted.

Cox continues to work as co-service chief alongside Mark Turrentine, MD and embraces opportunities to collaborate with other leaders.

“The further you get in leadership the more you are able to let go and let other people be involved in the work,” said Cox.

Over the years, Cox has been honored with many awards. In 2015, she received the External Achievements Award from IUPUI Chancellor Charles R. Bantz. In 2019, she was named a Women of Influence by the Indianapolis Business Journal.

In her current role as the chief medical officer at Riley Hospital for Children, Cox said she has moved from a physician leader to a health care leader. Throughout her career, Cox has built relationships, stepped into leadership positions, and collaborated with key leaders throughout the hospital and at the state level. Cox recognizes the unique leadership paths of each individual and tries to create opportunities for other emerging leaders.