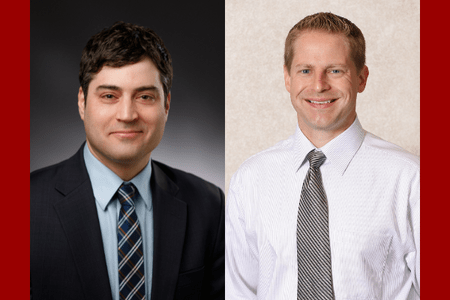 Even though their residency in the Department of Otolaryngology—Head and Neck Surgery at Indiana University School of Medicine overlapped for only a few years, Michael Harris, MD and Aaron Moberly, MD collaborate to this day—carrying on a tradition of teamwork.

The Department of Otolaryngology has a longstanding history of its residents placing into nationally recognized fellowship programs and hospitals. Most residents—about 60%—enter fellowship programs. The rest go straight to work in hospitals and private practices. And about half of the residents practice academic medicine.

After completing their residencies at IU School of Medicine, both Harris and Moberly separately matched into the neurotology/otology fellowship at The Ohio State University School of Medicine. They’ve since grown their academic medicine practices and research programs, attributing much of their success as faculty to what they learned while at IU.

"I've always appreciated the supportive nature of the Department of Otolaryngology at IU,” Moberly said. “They are really intentional about encouraging people in the direction that they want to pursue, and that’s the type of environment I want to foster as my career advances.” 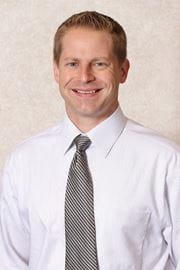 Moberly spent nine years at IU School of Medicine, as both a medical student and resident in the Department of Otolaryngology.

The summer before his second year of medical school, he studied speech perception and language development in children with cochlear implants in the DeVault Otologic Research Laboratory, under the leadership of David Pisoni, PhD, distinguished professor of psychological and brain sciences at IU, and Derek Houston, PhD, who Moberly now works with at Ohio State.

“Having that initial exposure to this group of psychologists studying cochlear implant outcomes very early on in my medical training gave me some insight into the importance of the brain and how it interprets and processes information coming through a cochlear implant,” Moberly said.

This unique perspective to cochlear implant research—how the ear connects to the brain—was formative, Moberly said, to how he has investigated cochlear implant outcomes throughout his career. The “team science” conducted in the DeVault Lab between scientists and clinicians is also a model to how he approaches his ongoing research.

“It was a really good environment as a junior trainee to see how productive that was and how mutually fulfilling that appeared for both the clinician and researcher,” Moberly said.

When Moberly began his fellowship at Ohio State, he reconnected with Pisoni—who has now been a mentor of his for well over a decade—as he was starting to apply some of the research methods he learned while studying children with cochlear implants in the DeVault Lab to his current research looking into outcomes in older adult cochlear implant patients. That collaboration and research has continued to grow since he joined faculty at Ohio State in 2013 after his fellowship.

In summer 2021, Moberly received his first R01 grant from the National Institute on Deafness and Other Communication Disorders, a member of the National Institutes of Health, to support his research in speech perceptions in adults with cochlear implants. Moberly said he’s grateful to have assembled a team of other scientist co-investigators to tackle this research.

“My training as a clinician really helped set the stage for that, but it also helps to rely on the expertise of people coming from different backgrounds,” Moberly said. “There’s something about building a team project that I’m really proud of.” 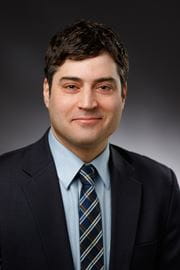 The training program, which ran from 1980 through 2016, was created and mentored by Pisoni and Richard Miyamoto, MD, chair of the Department of Otolaryngology from 1987 to 2014 and now professor emeritus.

“Being a part of the DeVault lab allowed me to hone my research skills and develop an understanding of the knowledge gaps in the field. It gave me a chance to meet and interact with many investigators working in different areas of cochlear implant research,” Harris said. “My time in the lab gave me a solid foundation for my career as a clinician-scientist.”

Pisoni not only taught Harris the science behind the lab, but he instilled the importance of creative collaboration with other researchers in adjacent but distinct fields of study, Harris said. This spirit was exemplified by the lab’s invited speaker series, regularly bringing in internal and external researchers with a variety of intellectual backgrounds.

“Having conversations with investigators working outside of your specific area of interest helps you see your own research challenges in a new light and consider different methodologies,” Harris said.

After his fellowship in the DeVault Lab, Harris completed his clinical training in otolaryngology, where he worked closely with the department’s neurotologists at the time—Miyamoto, Michael Fritsch, MD, Charles Yates, MD, and Rick Nelson, MD, PhD—all of whom had a big influence on his interest in the subspecialty.

After completing fellowship in neurotology/otology at Ohio State, Harris returned to his hometown, Milwaukee, Wisconsin, to join the faculty at Medical College of Wisconsin (MCW) in the Department of Otolaryngology and Communication Sciences. He primarily treats adults with hearing loss, middle ear disorders and lateral skull base tumors.

A significant component of Harris’ clinical practice is cochlear implantation, which dovetails with his research interest in surgical and patient factors that influence outcomes related to speech recognition and environmental sound perception. Additional research pursuits include the mechanisms linking hearing loss and cognitive decline and how hearing rehabilitation may affect that association.

Harris’ research has been supported externally by several foundation grants, and in 2021, he received an R21 grant from the NIH/NIDCD for his work on safety-relevant environmental sound perception in adults with hearing loss.

“The clinical and research training opportunities that I had at IU were very special and unique,” Harris said. “Several of my mentors and co-residents from IU are now close research collaborators and colleagues. I continue to benefit and grow thanks to my experiences at IU.”