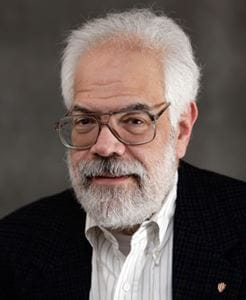 Most weekends, Bill Kronenberger, PhD, will get an email from his longtime colleague David Pisoni, PhD, sharing one of the latest research articles published about cognitive science.

“I’ll get it on a Sunday afternoon, and sure enough, it’s a fascinating article,” Kronenberger said. “Then it gets you thinking and it gives you new ideas. David is just a catalyst for great ideas, great research, great training.”

Pisoni, distinguished professor of psychological and brain sciences and chancellor’s professor of cognitive science, is celebrating his 50th year at Indiana University in 2020. Pisoni has spent the past 28 of those years at the DeVault Otologic Research Laboratory, part of the Department of Otolaryngology—Head and Neck Surgery at Indiana University School of Medicine.

Ranking 40th overall in the amount of National Institutes of Health grant funding received in the history of the university, Pisoni has mentored more than 200 postdoctoral research fellows, graduate students and medical students over those 50 years. Much of that was made possible through the Indiana T32 training grant program—which ended in 2016 after 36 years—that focused on speech, hearing and sensory communication. It was funded by the National Institute on Deafness and Other Communication Disorders, part of the NIH.

Kronenberger, professor of psychiatry at IU School of Medicine, has been collaborating with Pisoni at the DeVault laboratory, next to Riley Hospital for Children in Indianapolis, since about 2005. He calls Pisoni a pioneer in the basic understanding of how children develop language and thinking skills as they adapt to receiving a cochlear implant—the focus of the laboratory.

Connecting the ear to the brain

While on sabbatical in 1992, Pisoni, who ran a large basic science research lab and taught classes at IU-Bloomington, traveled to Indianapolis to visit the DeVault laboratory, upon the invitation of Richard Miyamoto, MD. Miyamoto, chair of the Department of Otolaryngology from 1987 to 2014 and now professor emeritus, is an early pioneer of cochlear implants and spearheaded the development of the lab as well as the cochlear implant program at IU School of Medicine. He implanted his first single channel cochlear implant in 1979. 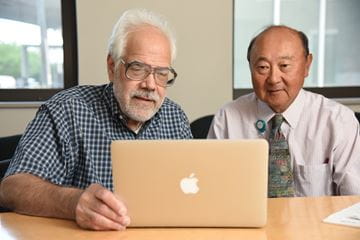 With funding coming to the cochlear implant program and DeVault laboratory from the NIH in the late 1980s, Miyamoto said the lab needed assistance with the assessment of patients with cochlear implants. This was research typically completed by cognitive scientists similar to those in Pisoni’s Speech Research Lab in Bloomington instead of clinicians, Miyamoto said.

Pisoni and Miyamoto decided to link their programs together in 1992, expanding upon Pisoni’s T32 training program. Miyamoto set up a special match for otolaryngology residents to spend two years in the lab as postdoctoral research fellows before finishing their residency training.

“We’re totally different personalities,” Miyamoto said about himself and Pisoni. “He’s a hard-charging PhD type, and I was a clinician, but we really figured out how this could fit together.”

Miyamoto said their partnership helped the department grow its NIH research funding and brought dozens of postdoctoral researchers and medical students into the lab, many of whom have had successful careers in otolaryngology and speech and hearing across the country.

Pisoni has spent nearly every Wednesday since (until the COVID-19 pandemic) in Indianapolis at the DeVault laboratory, focusing on the lab’s clinical research objective to improve the lives of those with hearing loss and achieve good outcomes from cochlear implants.

Before working with cochlear implants, Pisoni studied human speech perception. He led research for the United States Air Force on the perception of synthesized speech in cognitively demanding environments as well as the effects of noise on speech production. His research for General Motor Research Laboratories in the early 1980s on the effects of alcohol on speech articulation provided the underlying scientific foundation for the National Transportation Safety Board’s investigation of the cause of the Exxon-Valdez oil spill in March of 1989.

“Hearing loss is not only an ear issue,” Pisoni said. “It’s also a brain issue.”

“He is a big thinker. He is a great connector,” Kronenberger said. “He’s so intelligent and collaborative that he can bring together people who have very different backgrounds, to create innovative ideas that move the field forward.”

In 2010, Pisoni was named the recipient of the Silver Medal in Speech Communication, awarded by the Acoustical Society of America. The honor is given "for advancing the basic science of speech perception and recognition and applying the knowledge to the clinical field of cochlear implantation.” He is one of 14 recipients of the award since 1975.

About 10 years into Pisoni’s time at DeVault, he helped create the first lab in the world to study deaf infants before and after cochlear implantation. This was led by one of Pisoni’s postdoctoral researchers, Derek Houston, PhD, who has since taken the lab and its NIH grant to The Ohio State University College of Medicine.

“It was very, very exciting to be at the forefront of research,” Pisoni said. “It’s like Star Trek, going where no man has gone before. No one ever did anything like this.”

Shirley Henning, MS, CCC-SLP, speech language pathologist in the DeVault laboratory, said Pisoni has been an “incredible mentor” to her since she joined the lab in 2004. He always finds time to meet with people when he’s in Indianapolis, even if he’s not involved with their research.

Pisoni also has an astute memory for research and publications, she added.

“He’s a personality and a force,” Henning said. “We’re really lucky to have him in the lab. You can’t buy that wealth of information that he has stored in his head. I think he doesn’t forget anything. Do you remember a journal article that you read 20 years ago? No. He does.”

Not only has he mentored the staff at the lab, but all of the trainees throughout the years. Pisoni said students are valuable for research, saying their enthusiasm energizes him intellectually.

“You get a certain sense of satisfaction working with them,” he added. 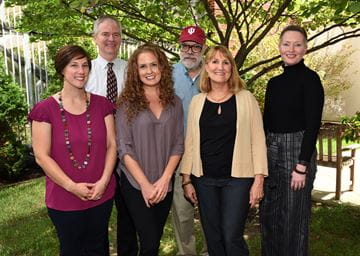 Rachael Frush Holt, PhD, was a postdoctoral fellow in the DeVault lab from 2003-05. Holt said Pisoni taught her how to love science and also how to mentor well.

Holt was recently promoted to professor in the Department of Speech and Hearing Science at Ohio State. The university allows faculty to choose an influential book to display in the library. She chose “The Handbook of Speech Perception,” edited by Pisoni and his longtime collaborator and friend, Robert Remez, PhD. A placard next to the book reads: “I selected this book because it is edited by my post-doc advisor, Dr. David Pisoni, whose passion for research, collaboration across disciplines, and genuine mentoring has made me a better scientist and person.”

Holt and Pisoni continue to collaborate as co-principal investigators on an R01 grant.

Irina Castellanos, PhD, remembers following Pisoni’s work throughout her undergraduate career, calling him a “superstar scientist.” They later met in 2009 at a conference when she was a graduate student.

“He walked up to me and handed me a flyer advertising a postdoc in his lab and promptly walked away,” Castellanos said, who eventually joined the lab as a postdoctoral researcher in 2012. She is now an assistant professor of otolaryngology at Ohio State.

Pisoni has had a profound impact on Castellanos’ research and also her personal life, she said. They call and text regularly, and her first-born daughter, Addison, calls him “Grandpa Dave.”

Aaron Moberly, MD, first met Pisoni near the start of his medical career. He was a medical student at IU School of Medicine and spent a summer in the DeVault lab in 2003.

“I remember being struck that summer by Dr. Pisoni’s desire to find common ground between the clinicians involved with cochlear implant patients and the researchers studying them,” Moberly said.

Years later as a neurotology fellow at Ohio State from 2011-13, Moberly, who had just completed his otolaryngology residency at IU School of Medicine, reconnected with Pisoni. He had asked Pisoni for advice on extending the research approaches developed at DeVault to Moberly’s clinical population of older adults with cochlear implants. That collaboration also prompted Pisoni to shift his cochlear implant research to include adults as well as children.

“Dr. Pisoni was exceedingly generous with sharing his group’s research measures and even equipment,” Moberly said, who’s now an associate professor of otolaryngology at Ohio State. “Dr. Pisoni is one-of-a-kind. There never has been, nor will ever be, anyone quite like him.”

David Horn, MD, spent two years as a postdoctoral fellow at DeVault during his otolaryngology residency at IU School of Medicine. While Pisoni wasn’t present during Horn’s residency interview, a few weeks after, Horn received an “enthusiastic” email from Pisoni mapping out half a dozen potential research projects to consider on the residency and several articles to read. Horn hadn’t even filled out his rank list yet for residency programs.

After matching at IU School of Medicine, Horn said Pisoni was the first faculty member to congratulate him. They started meeting regularly, discussing research, and Horn later joined DeVault as a postdoctoral researcher.

“Those years were exciting, challenging, rewarding, and absolutely crucial to my persistence and ultimate success in developing into a clinician-investigator,” Horn said. “Throughout my training, Dr. Pisoni was an incredible research mentor, life coach and friend.”

Horn is now an associate professor of otolaryngology at the University of Washington and the medical co-director of the Pediatric Cochlear Implant program at Seattle Children’s Hospital.

Pisoni said working at IU-Bloomington and IU School of Medicine for 50 years has allowed him not only to teach and conduct research with students of all backgrounds, but it’s provided him ample opportunities for high-level collaboration with researchers. He’s always looking for the next project; currently, Pisoni and neuroimaging investigators Shannon Risacher, PhD and Andy Saykin, PsyD at IU School of Medicine are studying hearing loss and cognition in elderly adults and its tie to dementia and social isolation.

“You meet new people, you get to work with young people who are smart, know more than you do, and you learn from them and you get invigorated,” Pisoni said. “I’m never bored, and it’s always intellectually stimulating. I think if you would get bored, then it’s time to retire.”