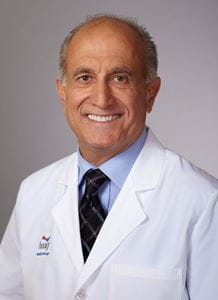 The IU alumnus was one of Indiana’s first physicians to specialize in treating patients grappling with drug and alcohol problems. 30 years later, his commitment hasn’t wavered.

Just an intern in 1981, Kambiz Karimi, MD, stood stunned in an emergency room.

On its floor, a homeless man, who’d arrived on the bitterly cold night suffering frostbite on his feet, writhed in shock. Karimi looked to the resident next to him and asked what to do. What came out of his colleague’s mouth saddened him.

“Let him die,” Karimi remembered. “He’s an alcoholic. He did this to himself.”

For Karimi, a 1981 graduate of IU School of Medicine, it was the trigger he’d been waiting for to pursue addiction medicine. Today, he runs 365 Recovery, based in Newport Beach, California, helping patients battling substance abuse through detox, outpatient recovery and long-term treatment.

His specialty is no longer a niche. Nor are his skills only called upon when a patient shows up in the emergency room. Instead, physicians treating addiction are vital as the U.S. wrestles with an opioid epidemic declared a national public health emergency.

And few physicians know the crippling repercussions of addiction better than Karimi.

Born in Iran, Karimi’s family was hounded by substance abuse. His father struggled with alcoholism, unleashing violent outbursts on his wives and children. In a rage, he once smashed a broomstick on Karimi’s arm, shattering the boy’s wrist. A step-brother also succumbed to heroin’s grip, committing suicide while Karimi was in his residency.

“It was a complete disaster,” Karimi said of his family. “I couldn’t wait to get away.”

Studying abroad was his respite. He attended Baylor University for his undergraduate degree, taking a series of odd jobs to scrounge up enough money for tuition. Often, while working at the Ramada Inn, he hoped diners wouldn’t clear their plates before leaving. Their scraps would often be his dinner.

After a brief return to Iran, Karimi and his wife, Susan, returned to the United States, where he attended medical school at IU School of Medicine. He specialized in internal medicine, but always with an eye toward treating addiction.

He finally got his start after founding Indianapolis Medical Group in 1986. Two years later, he became one of the first wave of physicians to earn formal board certification in the field. At the time, though, addiction was deemed a comorbidity—a factor that contributed to death from medical issues like liver cirrhosis in an alcoholic.

“Nobody really came in and said, “I’m drinking too much. Can you detox me?” Karimi said. “They usually came in with the medical complications from it.”

By the middle of the 1990s, though, Karimi’s practice tilted mostly toward addiction, and he became a frequent referral from fellow internal medicine physicians and other subspecialties. The nature of treatment shifted, too. The approach became holistic, with clinicians probing patients about their family life and their mental health.

“That was huge,” Karimi said. “If you ask me what the leading factor is in causing people to go drugs or alcohol, besides genetic predisposition, it’s childhood issues.”

Karimi saw the first seeds of today’s crisis being sown. In the late 1990s, physicians and pain management specialists leaned on prescription painkillers as the main course of treatment. While the practice may have been defensible, those same physicians may not have known if a patient had a genetic predisposition toward addiction. The volume of pills prescribed created a black market for sales.

“I started getting a lot of referrals from pain management and family practice doctors who realized their patients might have a problem,” Karimi said.

A few years ago a change in the formulation of OxyContin, a powerful opioid painkiller, made it harder to crush and snort drugs. Instead, users learned how to separate Naltrexone from the drug and use a syringe to take the drug intravenously. And if they couldn’t get ahold of pills, heroin was the next step.

The mushrooming crisis induced self-reflection among physicians, Karimi said. His peers pay closer attention now to signs that a patient may be dependent on drugs that—ideally—are a short-term solution. Increasingly, he said, pain management specialists along with primary care physicians are reaching out to consult with him about whether a patient may have a problem.

“The whole medical community is also becoming a team and coming together to figure out who those physicians are that are overprescribing,” Karimi said.

Six years ago, Karimi left Indiana and relocated to southern California to practice and, in 2015, started his recovery practice. The program is simple to describe: detox, a transition to a drug—Suboxone, for example—to deal with heroin withdrawal and a move to a treatment facility. If all goes well, a patient may go to a transitional living facility and get outpatient care from Karimi.

“After that, it’s really up to them to decide whether they want to continue with sober living,” he said. “They can stay there, go to work and make progress.”

Karimi admits the last 30 years, and his own upbringing, have numbed him when it comes to the plight of users. “I’m used to it by now,” he said. “When you see what I’ve seen, nothing shocks you.” Yet he says his experiences also allow him to speak to patients and families in a way that goes beyond clinical advice.

“I know exactly what their families are going through,” he said. “It makes those conversations easier, and the care you can give someone so much better.”