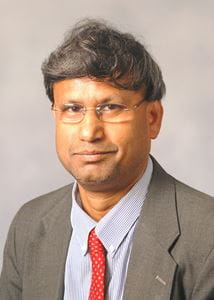 INDIANAPOLIS–Indiana University School of Medicine distinguished professor Debomoy Lahiri, PhD, has been named a 2022 fellow of the National Academy of Inventors–the highest professional distinction awarded to academic inventors. The fellows will be honored during the academy's annual meeting in June.

The National Academy of Inventors' Fellows Program highlights academic inventors who have demonstrated a spirit of innovation in creating or facilitating outstanding inventions that have made a tangible impact on the quality of life, economic development and the welfare of society.

Lahiri's research focuses on the neurobiology and genetics of aging and Alzheimer's disease. His work has led to several United States and international patents related to neurodegenerative diseases and neurodevelopmental disorders.

"My primary research interest is understanding how degeneration of brain cells under laboratory conditions can be more closely made to resemble the 'natural' neurodegeneration of Alzheimer's disease. This system can be used to test drugs to prevent or even reverse Alzheimer's-related degeneration," Lahiri said. "I am honored to be named a 2022 fellow along with so many other scientific innovators across the country. It is a team effort. I truly feel lucky to get this recognition and enormously benefitted from the help and support of my colleagues at IU School Medicine, other collaborators and the National Institutes of Health."

Some of Lahiri's most notable work includes:

"Such important academic inventions await additional work to translate their findings to benefit people," said Lahiri, who also serves as editor-in-chief of the journal Current Alzheimer Research. "The ultimate goals of these efforts are to develop molecular methods for diagnoses and to devise rational neuroprotective strategies for the prevention and treatment of age-related disorders."

In addition to his research, Lahiri actively promotes public awareness of neuroscience education and has been elected as a fellow of the American Association of the Advancement of Sciences.

Lahiri is one of 169 academic inventors named a National Academy of Inventors fellow this year. The 2022 fellows are from 110 research universities and worldwide governmental and nonprofit research institutes. They collectively hold over 4,800 issued U.S. patents.

"This year's class of NAI fellows represents a truly outstanding caliber of innovators. Each of these individuals has significantly impacted through their work and is highly regarded in their respective fields," said Paul R. Sanberg, PhD, DSc, president of the National Academy of Inventors. "The breadth and scope of their inventions are truly staggering. I am excited to see their creativity continue to define a new era of science and technology in the global innovation ecosystem."

To date, fellows of the academy hold more than 58,000 issued U.S. patents, which have developed over 13,000 licensed technologies and companies, and created more than one million jobs. In addition, over $3 trillion in revenue has been generated based on fellows' discoveries.

Other IU researchers previously elected National Academy of Inventors fellows include Chandan Sen, PhD, of IU School of Medicine and David Clemmer, PhD; Richard DiMarchi, PhD; and Gary Hieftje, PhD–all of the Department of Chemistry in the College of Arts and Sciences at IU Bloomington.

IU School of Medicine is the largest medical school in the U.S. and is annually ranked among the top medical schools in the nation by U.S. News & World Report. The school offers high-quality medical education, access to leading medical research, and rich campus life in nine Indiana cities, including rural and urban locations consistently recognized for livability.