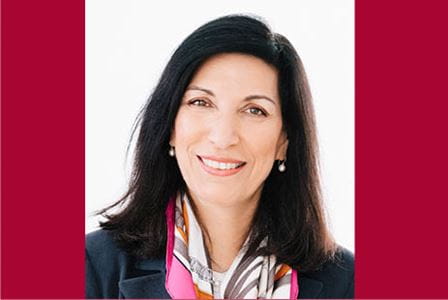 INDIANAPOLIS—Huda Zoghbi, MD has been named the 2023 winner of the August M. Watanabe Prize in Translational Research. Zoghbi is a Distinguished Service Professor at Baylor College of Medicine, director of the Jan and Dan Duncan Neurological Research Institute at Texas Children’s Hospital and an investigator with Howard Hughes Medical Institute. She will be honored at the 2023 Indiana Clinical and Translational Sciences Institute (CTSI) Annual Meeting on Friday, September 22, 2023.

Zoghbi’s research focuses on patients who are suffering from rare and mysterious disorders, including Rett syndrome. Rett syndrome is a neurodevelopmental disorder caused by a genetic mutation which leads to serious impairment, affecting a child’s ability to walk, talk, eat and breathe. The disorder is usually recognized in girls under the age of two. Zoghbi’s research has also contributed to the understanding of a wide variety of neurological disorders and other diseases including deafness, pediatric brain tumors and sudden infant death syndrome.

“I am deeply humbled by the recognition, given Dr. Watanabe’s legacy and contributions to translational research,” said Zoghbi. “I look forward to sharing my research and connecting with everyone at the Indiana CTSI Annual Meeting next September.”

“We are delighted to welcome Dr. Zoghbi to our campus next fall,” said Tatiana Foroud, PhD, executive associate dean for research affairs at IU School of Medicine. “Our researchers from across the state of Indiana will be able to learn a great deal by hearing about her broad range of expertise across the translational spectrum.”

Paul Klotman, MD nominated Zoghbi for the Watanabe Prize. Klotman is the president and CEO of Baylor College of Medicine, where Zoghbi is a distinguished service professor.

“Dr. Zoghbi has a remarkable gift for studying rare diseases in children to change the way we think about major human diseases,” said Klotman, who is also the executive dean at Baylor College of Medicine. “Her best-known work is in the area of neurology: adult-onset neurodegenerative conditions and postnatal-onset neurodevelopmental disorders. Without a doubt, her work has pointed the way to new treatments for these devastating disorders.”

In addition to her other achievements, Zoghbi co-discovered the gene for spinocerebellar ataxia type 1 (SCA1), a progressive condition which affects a person’s ability to move and balance. As an investigator at the Howard Hughes Medical Institute, a nonprofit research organization which aims to advance basic biomedical research and science education to benefit humanity, Zoghbi’s team is looking for ways to reduce abnormal proteins that accumulate in degenerative conditions, such as Alzheimer’s disease.

As winner of the Watanabe Prize, Zoghbi will be the keynote speaker at the 2023 Indiana CTSI Annual Meeting, which will be focused on neurological disorders.

The Watanabe Prize is one of the nation’s largest and most prestigious awards recognizing individuals focused on shepherding scientific discoveries into new therapies for patients. The prize is awarded to a senior investigator who has made a significant contribution to the field of translational science. It is named in honor of the late August M. Watanabe, a titan in the field of translational research in both academia and industry who impacted the health of people around the world as a leader at Indiana University School of Medicine and Eli Lilly and Company.

Watanabe began his career at Indiana University in 1972 and served as chair of the Department of Medicine from 1983 to 1990. From there, he joined Eli Lilly and Company, where he was ultimately named executive vice president, overseeing the launch of 11 drugs and doubling the size of Lilly’s research and development organization.

About the Indiana Clinical and Translational Sciences Institute

The Indiana Clinical and Translational Sciences Institute (CTSI) brings together the state’s brightest minds to solve Indiana’s most pressing health challenges through research. It is a statewide partnership among Indiana University, Purdue University, the University of Notre Dame and the Regenstrief Institute collaborating with numerous life sciences businesses, government entities, and community organizations. The Indiana CTSI engages with the public at every level of research—from basic science to patient care. It has been continuously funded by multimillion-dollar grants from the National Institutes of Health since the Indiana CTSI’s founding in 2008 and is housed at the Indiana University School of Medicine. For more information, visit indianactsi.org.

Indiana University School of Medicine is the largest medical school in the United States and is annually ranked among the top medical schools in the nation by U.S. News & World Report. The school offers high-quality medical education, access to leading medical research and rich campus life in nine Indiana cities, including rural and urban locations consistently recognized for livability.