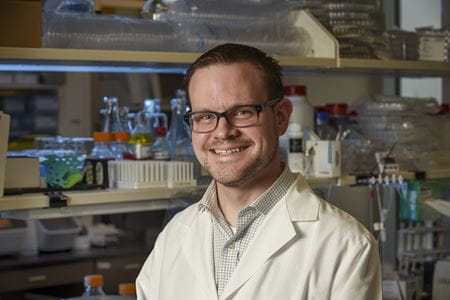 INDIANAPOLIS—Alcohol use disorder affects more than 2 billion people worldwide, and fewer than 10 percent of people who seek treatment receive an FDA-approved therapy. The need to develop new, effective and widely accessible therapies is of the utmost importance.

Addiction researchers at Indiana University School of Medicine are trying to bridge that gap through their studies into binge drinking. An article recently published in eLife shows how the researchers, led by Brady Atwood, PhD, associate professor of pharmacology and toxicology, have identified a new pathway in the brain that controls binge alcohol drinking behavior.

“This study is quite impactful because we are the first to demonstrate that this pathway controls behavior of any kind,” Atwood said. “We showed that over time, continued binge alcohol drinking produces changes in this brain pathway that gives it the ability to control drinking, a function it did not have prior to that binge drinking.”

Activating this pathway in experienced drinkers reduces their alcohol consumption, which Atwood said implies therapeutic interventions that target this pathway may be a way to combat problematic alcohol drinking that can lead to addiction and potentially death.

“Our work suggests that dysfunction of neurons from the anterior insular cortex to the dorsolateral striatum may be indicative of pathological alcohol intake that correlates with higher risk for binge drinking,” Atwood said. “This information could be leveraged as a biomarker in a clinical setting to help physicians define patient populations and match them with more effective therapies.”

The researchers did also find that there appear to be differences in how alcohol affects this brain pathway in males and females, a discovery that will require much additional exploration.

Atwood and his team of researchers also study how opioid use affects the brain, specifically in utero drug exposure, and that work has suggested that opioids may have similar effects on the anterior insular cortex-dorsolateral striatum pathway as alcohol.