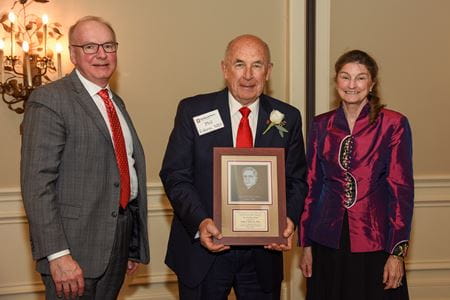 Given annually by the school’s J.O. Ritchey Board, the award recognizes individuals who have made enduring commitments to the School of Medicine, the medical profession and their patients and have made a planned gift to the school.

Eskew spent three decades as an OB-GYN and clinical professor with the IU School of Medicine Department of Obstetrics and Gynecology. Eskew also served as Medical Director of Women and Children’s Services and OB-GYN Residency Director at St. Vincent Hospital, where he was honored with their Distinguished Physician Award in 2000.

Aside from his medical practice, Eskew has been active in professional and community organizations such as the American College of Obstetricians & Gynecologists, including a term as its vice president. In 1996, Governor Evan Bayh awarded him the Sagamore of the Wabash.

Eskew is also a long-serving member of the Indiana Guard Reserve, becoming the first doctor to join their ranks in 2001. He created the 19th Medical Regiment, a medical unit dedicated to supporting the Indiana National Guard in the event of a natural disaster. After 26 years combined in the Army Reserves and the Indiana Guard Reserves, he retired in 2020 with the rank of Brigadier General.

As an Emeritus Professor in the School of Medicine, Eskew continues to mentor medical students at the Bloomington campus. In service to Indiana University, he served four terms as an alumni-elected IU Trustee from 2006-2018. He is currently President Pamela Whitten’s liaison to the advisory boards of four IU regional campuses.

The J.O. Ritchey Award is named after James Oscar Ritchey, MD, a native Hoosier, IU School of Medicine alumnus and faculty member for more than 60 years who left an indelible impression on students.

IU School of Medicine is the largest medical school in the United States and is annually ranked among the top medical schools in the nation by U.S. News & World Report. The school offers high-quality medical education, access to leading medical research and rich campus life in nine Indiana cities, including rural and urban locations consistently recognized for livability.