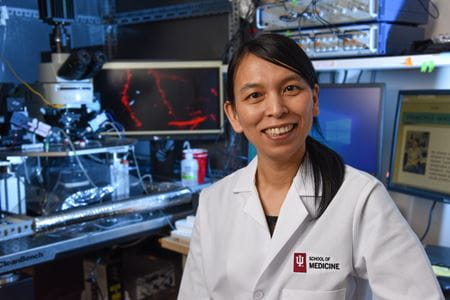 INDIANAPOLIS—Researchers from Indiana University School of Medicine are studying why neuropsychiatric symptoms, such as apathy and irritability, appear in most Alzheimer’s disease patients before the onset of memory loss.

The study, led by Yao-Ying Ma, MD, PhD, assistant professor of pharmacology and toxicology, was recently featured in the publication Molecular Psychiatry. The team of researchers identified a receptor in the brain that leads to a loss of neurons and synaptic structure when used in an Alzheimer’s disease model.

The investigation focused on the nucleus accumbens, a critical brain region processing motivation. Located in the ventral striatum, this region is not studied much among Alzheimer’s disease researchers, Ma said; it’s mainly researched to understand motivational and emotional processes. Previous studies, Ma said, have shown that the volume of nucleus accumbens, like the cortical and hippocampal regions in the brain, is reduced in adults with Alzheimer’s disease.

Ma, who is relatively new to the field of Alzheimer’s disease research, has a background in drug addiction studies and synaptic communication—the process by which neurons talk to each other in the brain. Some of the neuropsychiatric symptoms among people who suffer from substance abuse—apathy, mood swings, anxiety—are also found in Alzheimer’s disease patients.

“Even before the onset of cognitive deficits, a significant number of Alzheimer’s patients start showing mood swings, and they have a greater chance to have symptoms of depression,” Ma said.

These neuropsychiatric symptoms, however, tend to occur earlier than memory loss, but no effective treatments are available, Ma said. She emphasized that there is an urgent need to understand why those symptoms exist and how they correlate with cognitive deficits. Ma said this study identified synaptic calcium permeable receptors (CP-AMPARs) in the nucleus accumbens in an Alzheimer’s disease model. The receptor, which is normally absent in that part of the brain, gives permission for calcium to enter the neurons. This leads to an overload of calcium, which leads to a breakdown of its synaptic structure. In turn, calcium accumulation triggers a cascade of intracellular changes that can be lethal to the neuron by amplifying calcium overload via a positive feedback mechanism.

This synaptic loss in the brain causes motivation deficits. Knowing this, Ma said that targeting these receptors in the brain and blocking them could prevent or delay the onset of Alzheimer’s disease associated neuropsychiatric symptoms, and ultimately cognitive deficits.

“If we can postpone the pathological progression in one of the affected areas, like the nucleus accumbens,” Ma said, “that may delay pathological changes in other regions.”