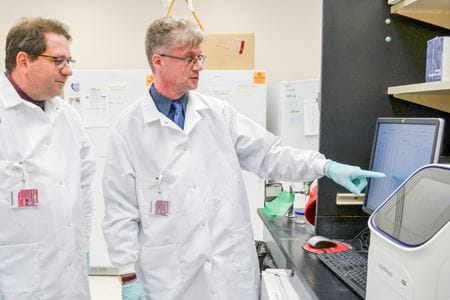 INDIANAPOLIS—An Indiana University School of Medicine researcher will lead a multi-institute effort toward improved therapies for hemophilia with help from a $12 million grant from the National Heart Lung and Blood Institute. Led by Roland Herzog, PhD, the program project award will fund basic and translational studies that explore three major themes in a gene therapy approach that could lead to safer—and potentially curative—treatments for the disorder.

Hemophilia is an X-linked genetic condition that prevents the blood from clotting properly. It occurs in about 1 out of 5,000 male births. In patients with severe forms of the disease, an internal or external bleed can be life-threatening. Standard treatments for severe hemophilia involve intravenously replacing the clotting factor proteins that patients are unable to produce adequately on their own. However, a gene therapy approach uses adeno-associated viruses as a delivery mechanism to provide the body with the information it needs to start making its own clotting factors.

“Several companies have taken this forward into clinical trials, and in some of these trials, the patients initially looked like they were cured,” said Herzog, who is the Riley Children’s Foundation Professor of Immunology. “But what they all have in common is that they need to deliver a lot of the virus in order to get the desired results, and over time clotting factor levels started to decline. So, it’s clear that we need to further study the biology of this phenomenon.”

In hemophilia A, which accounts for about 80 percent of all cases of hemophilia, patients do not produce a sufficient amount of a clotting protein called factor VIII (FVIII).  To better understand the interdependent mechanisms that are mitigating the effects of current drug candidates, Herzog is teaming up with some of the nation’s leading experts.

Their program will focus on three major projects in gene therapy for hemophilia A:

Together, they hope to provide new insight that can lead to lower levels of toxicity and improved longevity of FVIII production in patients who are treated with gene therapy for hemophilia.

To help support the program, the grant will also fund a core that generates human liver cells and a core that manufactures gene therapy vectors and analyzes them on a molecular level.  Additionally, the program will receive regular counsel with an internal and external scientific advisory board.

“This is an incredibly significant and urgent medical question, and it requires the synergy of multiple groups with different expertise to come together and solve a problem that they wouldn’t be able to solve on their own,” said Herzog. “My hope is that our studies will help the field as a whole move toward curing hemophilia A.”

The above referenced grant is project number P01HL160472, titled “Toward Safer Gene Therapy for Hemophilia A,” funded by the National Institutes of Health NHLBI. For more information in the Gene and Cell Therapy Program and its focus on gene therapy for hemophilia, visit the Herman B Wells Center for Pediatric Research website.