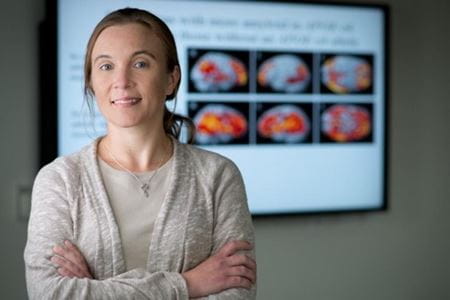 INDIANAPOLIS—New research from Indiana University School of Medicine shows that the presence of neurodegenerative proteins is associated with common head injury among the general population.

Recently published in Alzheimer's & Dementia: Diagnosis, Assessment & Disease Monitoring, a journal of the Alzheimer’s Association, a study led by Shannon Risacher, PhD, associate professor of radiology and imaging sciences at IU School of Medicine, explored brain imaging data from individuals who have a history of head injury to see whether or not there was a link to a higher level of tau, a protein associated with cognitive impairment in Alzheimer’s disease.

“While previous studies on head injury primarily looked at individuals in sports or the military,” Risacher said, “we wanted to shift the focus onto the general population to determine how common head injuries, like from car collisions or falling, could also play a significant role in one’s future health, particularly their risk for developing dementia.”

Using data from the Alzheimer’s Disease Neuroimaging Initiative (ADNI) and the Indiana Memory and Aging Study (IMAS), the research examined two cohorts of participants: one individuals with normal cognition and the other with those who are cognitively impaired. Results showed that those who had a history of head injury and were cognitively impaired had a much higher amount of tau in the brain, especially for individuals who had a history of head injury with a loss of consciousness.

For Risacher, this study also highlighted the importance for scientists and physicians to consider asking patients direct and specific questions regarding head injury. While 25 percent of participants from the local IMAS cohort mentioned a history of head injury when specifically asked, only six percent of participants from ADNI cited head injuries. This difference suggests specific questions were either not asked to participants or some weren’t certain that even minor head injuries were worth mentioning to their physician.

“If a doctor asks ‘What’s your medical history,’ not many people realize that certain head injuries are worth mentioning,” Risacher said. “Maybe you hit your head and were dazed for a few days, but then it passed. This research shows that that might not be the case. You might have recovered, but your brain may still have an impact from that head injury which could lead to increased tau down the road.”

By asking patients more specific questions, not only can they reveal more of their medical history, but it could also lead to a more personalized approach to their health care. Illnesses like cardiovascular disease, diabetes and traumatic brain injury are linked to higher risks for dementia. By understanding various life style factors and comorbidities, a predictive model based on life experiences can be established for each individual patient.

“I think the more that we can understand multiple factors on cognitive decline, the more we have the opportunity to personalize treatments that come along,” Risacher said. “We could actually match the treatment with the person for whom it’ll be most effective.”

This research encourages the public to take any head injury seriously, recognizing that even daily or minor events can still have an impact on future cognition.