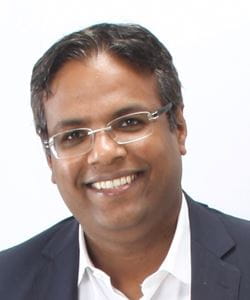 INDIANAPOLIS—Widely renowned for his groundbreaking research that spans the physical and biological sciences, engineering and medicine, translational imaging scientist Rohan Dharmakumar, PhD, has been named the inaugural director of the Krannert Cardiovascular Research Center. This research center is being newly established as part of the Cardiovascular Institute, a joint enterprise between Indiana University School of Medicine and Indiana University Health on the forefront of cardiovascular care, research and education. The appointment is effective August 15.

Dharmakumar was recruited to IU School of Medicine from Cedars-Sinai Medical Center in Los Angeles, where he most recently served as professor of medicine and associate director of the Biomedical Imaging Research Institute.

Among the important discoveries led by Dharmakumar, some of the highest-impact include demonstrating the adverse effects of intramyocardial hemorrhage and chronic myocardial inflammation following myocardial infarction, designing a method to reliably and noninvasively evaluate changes in myocardial oxygenation in response to coronary stenosis and showing that iron deposits within the infarction territories can drive electrical instabilities in the heart.

Dharmakumar earned his Bachelor of Science in Physiology and Physics, his Master of Science in Mathematics and his PhD in Medical Biophysics from the University of Toronto. He received postdoctoral training in cardiovascular MRI at the University of Toronto and then Northwestern University. In 2006, he joined the faculty in the Department of Radiology at Northwestern, and later went on to the Department of Biomedical Science at Cedars-Sinai in 2011 as associate professor. There, he held various leadership roles at the Biomedical Imaging Research Institute, including associate director, director of translational cardiac imaging research and finally co-director of PET/MRI research, a role he has held since 2014. He has been a professor in the Department of Biomedical Sciences at Cedars-Sinai since 2018, and additionally in the Department of Medicine at UCLA since 2020.

In his new role leading the strategic research efforts of the Cardiovascular Institute, Dharmakumar will advance the Institute’s vision of being one, diverse, academic health enterprise where people come to receive the highest quality heart and vascular care in their community, while also enabling relentless innovation that fuels better health for Indiana and beyond.