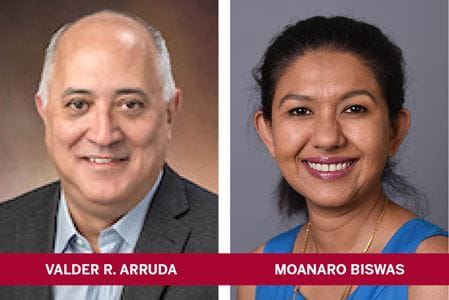 A group of scientists have just made a key discovery that could prevent and eradicate immune responses that lead to treatment failure in about one-third of people with severe hemophilia A.

Hemophilia is the most common severe inherited bleeding disorder in men. The disease affects 1 in 10,000 males worldwide and results from deficiency of blood clotting factor VIII (FVIII). Both children and adults with hemophilia A (80 percent of all hemophilia) receive treatment that involves infusing FVIII protein into the bloodstream. However, about 30 percent of them develop an immune response in the form of antibodies to FVIII (inhibitors), rendering treatment ineffective and increasing risk of mortality.

For inhibitor-positive patients, immune tolerance induction (ITI) options are scarce, costly and invasive. Investigators at Indiana University School of Medicine, Children’s Hospital of Philadelphia and University of Pennsylvania joined efforts to explore immune responses to FVIII under an NIH-funded U54 initiative.

The study, led by IU School of Medicine’s Moanaro Biswas, PhD, and Valder R. Arruda, MD, PhD, from Children’s Hospital of Philadelphia and the University of Pennsylvania, is titled “B cell activating factor modulates the factor VIII immune response in hemophilia,” and was published in the Journal of Clinical Investigation earlier this month. Bhavya Doshi, MD, from Children’s Hospital of Philadelphia, is the first author.

In it, the group used plasma samples from pediatric and adult hemophilia A patients and animal models to determine whether BAFF plays a role in the generation and maintenance of FVIII inhibitors.

They also looked at combining antibody to BAFF in an ITI approach with a CD20 antibody (rituximab). Rituximab alone has shown mixed results in eradicating inhibitors when used alone in previous studies for hemophilia A.

Major findings from the study include:

Next, the group will perform in-depth mechanistic studies to identify additional BAFF modifiers, which may provide additional insight into the pathways that lead to BAFF elevation and inhibitor formation.

These data also have important translational potential for inhibitor in hemophilia A, since there is an FDA-approved anti-BAFF antibody currently used as part of immunosuppressive regimens for autoimmune diseases.