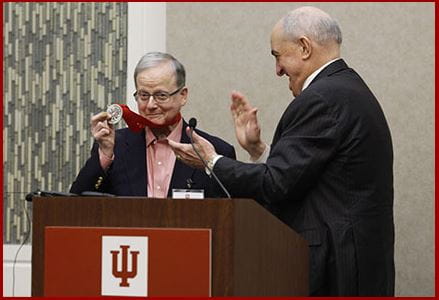 IU President Michael A. McRobbie applauds Distinguished Professor Hal Broxmeyer, PhD, moments after presenting the researcher with the President’s Medal for Excellence during a symposium on August 23, 2019.

When Jay Hess first arrived at Indiana University School of Medicine as dean six years ago, he received a meeting request from Hal Broxmeyer, one of the school’s legendary researchers who is internationally celebrated as the father of umbilical cord transplants. Hess suspected Broxmeyer—at the time closing in on 70 years old—might want to share news that he was planning to retire.

“I was quickly disabused of that notion,” Hess told a group of about 150 people who gathered on August 23 at a symposium in honor of Broxmeyer. In fact, Hess left that initial meeting thinking, “He’s not slowing down at all. He’s speeding up.”

Indeed, more than 36 years after arriving at IU School of Medicine and a decade after he took on the title of emeritus—a status that typically indicates plans to step back from day-to-day faculty responsibilities—Broxmeyer continues to operate at breakneck speed.

During his time at IU, he and his team have received more than $92 million in research grants and published more than 795 papers that have been cited more than 63,000 times.

In recognition of his impact and influence, IU President Michael A. McRobbie presented Broxmeyer with the President’s Medal for Excellence, a rare honor which is awarded to individuals at Indiana University for “outstanding academic, artistic or professional accomplishments or to individuals for exceptional service to the university.”

“Dr. Broxmeyer’s work in the area of human umbilical cord blood as a source of transplantable hematopoietic stem cells truly has been pioneering,” McRobbie said. “His research has brought much closer the possibilities of a cure in some forms of cancer and blood diseases in children and adults.” 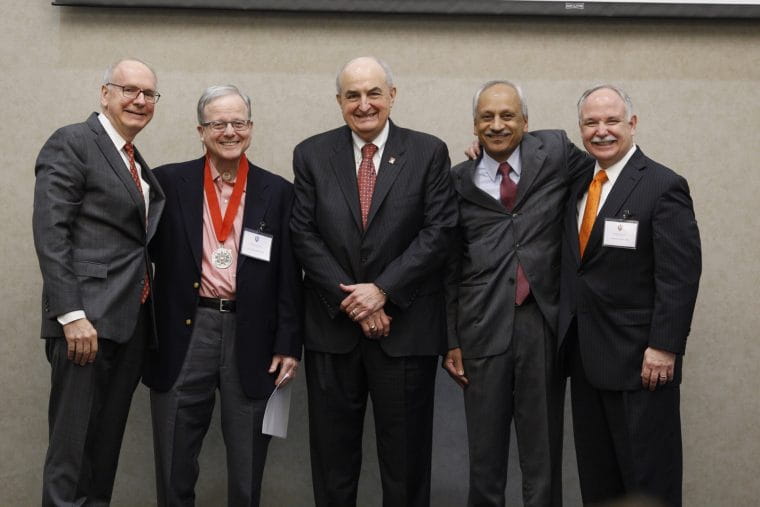 Broxmeyer, a Distinguished Professor and researcher in the IU Simon Cancer Center, has dedicated much of his career to advancing research related to hematopoietic stem and progenitor cells, which produce new blood cells to replenish those that die or are damaged and are vital for human health. In the 1980s, he and his lab proved umbilical cord blood—which had routinely been discarded after birth—could be used as a source of hematopoietic stem cells to treat disease.

His lab processed the blood used in the first cord blood transplant in Paris and subsequent transplants in Baltimore, Cincinnati and Minneapolis.

Cord blood transplants have since been performed more than 35,000 times to treat diseases such as leukemia, lymphoma, sickle cell disease and Wiskott-Aldrich syndrome.

As part of that work, Broxmeyer set up the first proof-of-principle cord blood bank in his laboratory in the 1980s; an entire industry of cord blood banking has since sprung up as a result of his discoveries and the potential cord blood holds to treat diseases that may arise throughout an individual’s life.

Through it all, Broxmeyer has remained at the forefront of the field and has continued to seek ways to make cord blood transplants more efficient and effective.

For his part, Broxmeyer was quick to share credit with the many researchers who have worked in his lab and with whom he has collaborated through the years. And he wanted to make one point perfectly clear to those who gathered to honor him: “Again, this is not a retirement.”

“I look forward every day to coming to work,” he said, “and I’m hoping we will continue to be productive.”

If history is any indication, that seems a foregone conclusion.