Researchers at Indiana University School of Medicine have developed a model to predict how likely someone is to die within six months of a drug-induced liver injury.

Their findings were recently published in Gastroenterology. Lead author Marwan Ghabril, MD, associate professor of medicine at IU School of Medicine Department of Medicine Division of Gastroenterology, said drug-induced liver injury is fairly rare, but happens when a patient has a reaction to a medication related to another condition, such as antibiotics or chemotherapy.

“A lot of people take medications,” Ghabril said. “Drug-induced liver injury is pretty rare on a patient to patient basis, but it is commonly seen in our clinical practice as an academic liver center.”

The severity of liver injury can vary significantly. Patients may not know they’re having any issue, or they could be experiencing several different symptoms.

“It could be completely asymptomatic,” Ghabril said. “Or, they may have symptoms like abdominal pain or nausea. They’ll have abnormal liver tests, and in the most severe cases, they can present with liver failure.”

About 1 in 5 patients who experience drug-induced liver injury may have a prolonged injury of more than six months and approximately 1 in 10 may die in that time. The researchers observed that patients with many chronic medical conditions tended to fare poorly relative to otherwise healthy patients after these types of liver injury. 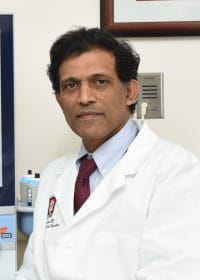 As investigators in a large multicenter study in the area of drug-induced liver injury, Ghabril and senior investigator Naga Chalasani, MD were well positioned to further explore this observation. Ghabril, Chalasani and the other authors decided to quantify the severity of comorbid conditions in patients with suspected drug-induced liver injury and assess their impact on risk of mortality. They included measures of severity of liver injury along with demographic and laboratory data in their analysis. The key finding was that patients with significant comorbidity had an independently increased risk of dying within 6 months of suspected drug-induced liver injury. The researchers developed a mathematical model that could predict 6-month mortality in these patients, which incorporated comorbidity burden and laboratory data.

The team then collaborated with fellow liver specialists who followed a similar cohort of patients at the University of North Carolina and were able to externally validate their model in that independent group of patients.

“Every clinician will need to interpret the result in the setting of what’s happening with that patient,” Ghabril said. “Sometimes the liver injury may be severe and the most important determinant of outcomes, but the patient may also suffer from multiple chronic conditions, and have increased risk of death even with milder forms of liver injury. So the importance of the score lies in its ability to estimate risk of death on a case by case basis.”

Ghabril said one situation where this model could be helpful is in patients considering a liver transplant.

“If the estimated mortality risk is very low, then a clinician can reassure their patient,” Ghabril said. “If the mortality risk is very high, it could inform how closely patients are followed and even considerations of liver transplantation and/or more proactive preparation for end of life discussions and care, depending on the circumstances. Patients and doctors would want to know if they are dealing with a high-risk condition or not.”

Researchers are continuing to study the role of comorbidity in determining clinical outcomes. In the future, Ghabril said they plan to study its impact in different cohorts and study the same question of comorbidity and outcomes in patients with other forms of acute injury and in chronic liver disease.

Read the full publication in Gastroenterology.

Learn more about gastroenterology research at IU School of Medicine.