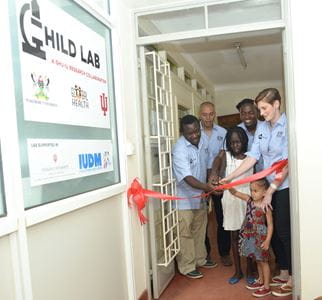 More than 200 million children around the world are at risk of failing to meet their developmental potential, and the risk is highest for children in sub-Saharan Africa.

In that part of the world, severe malaria is a leading cause of acquired neurodisability—leaving many children with developmental delay even years after recovery. Scientists don’t fully understand how malaria impacts the developing brain in children, but led by Indiana University School of Medicine researchers is the first to link malaria-related acute kidney injury (AKI) to long-term neurocognitive impairment.

Led by Chandy John, MD, Ryan White Professor of Pediatrics in the Department of Pediatrics, IU researchers partnered with the Makerere University College of Health Sciences and the Mulago National Referral Hospital in Kampala, Uganda, to conduct a large clinical study evaluating the long-term impact of AKI on children with severe malaria. They found that AKI is not only a common complication of severe malaria, but is linked to long-term adverse health outcomes.

John and Conroy said that they intend to further investigate the development of AKI in instances of severe malaria. By investigating the mechanisms that lead to AKI in some children with severe malaria—or the mechanisms that prevent AKI in others—scientists may begin to develop improved therapies that could lead to positive long-term health outcomes for people in sub-Saharan Africa.

The above reference project is titled Malarial Impact on Neurobehavioral Development, project number R01 NS055349-11, and is funded by the National Institute of Neurological Disorders and Stroke. The study was published on May 21, 2019 by BMC Medicine.