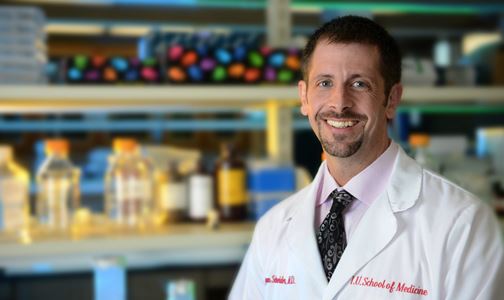 African American women participating in a clinical study on breast cancer had more side effects and poorer survival rates than did women of European ancestry, according to a recently published Indiana University study that identified ethnicity through genetics, a first in this type of research.

Instead of relying on self-reporting of race, the researchers utilized genetic information from a National Cancer Institute-sponsored study that compared the therapy-induced toxicity of three standard adjuvant drugs. That national study looked at anthracycline-induced congestive heart failure, taxane-induced peripheral neuropathy and bevacizumab-induced hypertension and compared the results between patients of African ancestry and patients of European ancestry.

All the women were genetically tested for ethnicity to increase the accuracy of reporting ancestry and to look for biomarkers that may provide clues to how patients would respond to the three chemotherapy agents.

Bryan P. Schneider, MD, associate professor of medicine and of medical and molecular genetics and Vera Bradley Investigator in Oncology at IU School of Medicine, said the initial results of the 5,000 patient, NCI-sponsored, cooperative group study raised other questions he wanted to explore.

The adjuvant study showed that ancestry was a factor when comparing side effects. “We found that African Americans had more severe side effects in general. We were further able to identify genetic markers–beyond those that determine ancestry–that were able to tell whether an African American patient might be at an extraordinarily high risk for some of these severe side effects,” said Dr. Schneider, a researcher at the Indiana University Melvin and Bren Simon Cancer Center.

Importantly, Dr. Schneider and his team wanted to evaluate whether there was a direct connection between the side effects and the overall effectiveness of the medication. These findings were published in the Journal of Clinical Oncology Precision Oncology and compared outcomes between 386 patients of African ancestry and 2,473 patients of European ancestry.

“What we found was that African Americans were markedly more likely to have reductions in dosing of an important part of the chemotherapy (the taxane) because of their side effects and these reductions in doses led to a less favorable outcome from a breast cancer standpoint,” he said.

“Prior studies have demonstrated that African American patients don’t do as well because of socio-economic factors or maybe the biology of the tumor,” Dr. Schneider said. “These are the first data, however, to show that one of the variables that impacts outcome is a greater likelihood of drug side-effects which limits the receipt of the very chemotherapy drugs needed for better outcomes.”

Oncologists commonly reduce dosages or the frequency of treatments in response to severe side effects to mediate illness and discomfort experienced by cancer patients.

Dr. Schneider said this study increases awareness of the multiple important aspects of treatment, which must be considered for African American breast cancer patients. However, the findings also give rise to new questions, he said.

“Can we identify a group of African American patients who won’t experience toxicity and might do well with the current standard therapies? Can we further identify the group of patients that is not going to do well before therapy and do something about it, such as using alternative drugs that might be equally effective but less toxic? Can these genetic findings provide insight into the cause of the side effects and result in ideas for novel drugs designed to prevent the side effects all together?” he posited.

This research was supported by funding from the National Cancer Institute, a Susan G. Komen for the Cure Promise Award and the Vera Bradley Foundation for Breast Cancer.

Dr. Schneider is a member of the Vera Bradley Foundation for Breast Cancer Research Laboratories, which include more than 30 researchers at IU School of Medicine focused on treating, preventing and curing breast cancer.