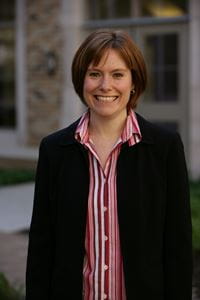 SOUTH BEND, Ind. — Molly Duman Scheel, PhD, associate professor of medical and molecular genetics at Indiana University School of Medicine-South Bend, was awarded two multi-year grants from the Department of Defense (DOD) to aid her work in abetting mosquito-borne illnesses and keep field troops safe from diseases, such as Zika and dengue.

Dr. Scheel received $750,000 from the Deployed War Fighter Protection (DWFP) Program to address adult mosquito abatement. Partners on the project include David Severson of Notre Dame, the Walter Reed Army Institute of Research in Maryland and the Armed Forces Research Institute of Medicine Sciences in Thailand.

The Scheel lab, in conjunction with Notre Dame’s Eck Institute for Global Health, has developed a larvicide based on interfering RNA pesticides, a novel class of environmentally safe insecticides. The effectiveness of the larvicide has been proven in the lab and is being tested in a tropical testing ground in Belize managed by Notre Dame. The larvicide is applied to naturally developing pockets of standing water that turn up in barrels, abandoned tires and other receptacles.

For the grant with Dr. Achee, Dr. Scheel will introduce ovitraps, or traps designed to be attractive environments for mosquitoes to lay eggs. While the concept of ovitraps has been developed and tested, Scheel’s project will introduce new larvicides that are environmentally safe and to which mosquitoes have not developed resistance. Besides Scheel and Achee, the research team will include Notre Dame researchers John Grieco, Dave Severson and Na Wei, of the Eck Center, as well as Kathleen Eggleson, a researcher at IU School of Medicine-South Bend.

For the DWFP-funded study, Scheel, Severson and their military collaborators will extend their interfering RNA larvicide work to identify pesticides that target both developing as well adult mosquitoes. Adult mosquitoes, which feed on plant nectar, require sugar meals for survival.  In recent years, attractive toxic sugar baits have demonstrated great potential in the war against mosquitoes. The use of interfering RNA pesticides, a biorational alternative to conventional pesticides, would reduce the impacts of these toxic baits on non-target insects.

“The interest the Department of Defense has in this project acknowledges the large number of military personnel, military support personnel and military family members who are deployed to areas where mosquito-borne illnesses are prevalent,” Dr. Scheel said. “Their exposure to Zika and dengue fever is ongoing. In the case of Zika, a troop’s potential to infect a spouse or partner is another level of concern.”