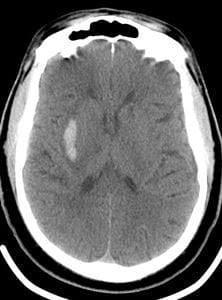 INDIANAPOLIS – Cocaine and amphetamine use are linked to a higher risk of intracerebral hemorrhage, but guidelines recommending drug screening for those stroke patients often weren’t followed in a study of two academic teaching hospitals, Indiana University School of Medicine researchers reported.

The researchers found that the stroke patients were screened less than half the time. African-American patients, meanwhile, were significantly more likely to receive the drug screening than were other patients.

As the patients moved through the treatment process after being admitted to the hospital, “there were multiple opportunities for these patients (to be screened) and we all missed it,” said Jason Mackey, MD, assistant professor of neurology and senior author of the paper, which was published online ahead of print in the journal Neurology.

“This was a compelling message that we needed to redesign our systems,” Dr. Mackey said.

That redesign has already happened at one of the hospitals, IU Health Methodist Hospital in Indianapolis, he said. The hospital’s order set — a checklist of hospital orders relevant to a patient’s diagnosis — for intracerebral hemorrhage was changed so that ordering the drug screen is pre-checked. This ensures a drug screen will be performed unless a physician acts to uncheck the test in the order set.

The study’s results indicate that hospital systems need to make systematic efforts to improve screening systems, the researchers said. More research also is needed to better understand the relationships between cocaine and amphetamine use and the incidence and outcomes from intracerebral hemorrhage, they said.

Mackey noted that earlier research has found rising levels of substance abuse among stroke patients. In addition, intracerebral hemorrhage patients tend to have poorer recoveries if they have been using cocaine or amphetamines. Moreover, “part of figuring out the best care is determining a possible cause,” he said.

The researchers studied records of 610 patients admitted to the two hospitals from 2009 to 2011, a period selected because it straddled the issuance of revised guidelines for treating intracerebral hemorrhage in 2010. The guidelines recommended drug screenings in young or middle-aged patients, as they had in the previous version issued in 2007.

Patients who were younger, black, or currently smoked tobacco were more likely to be screened.

The racial disparity in screening was most pronounced among middle aged patients, from 45-64 years. Among patients aged 45 to 54, for example, 60 percent of black patients were screened for drugs of abuse, while 20 percent of non-black patients were screened. The researchers noted that the screening disparities were much greater than those found in the 2011 National Survey on Drug Use and Health, which reported illicit drug use among African-Americans at 10 percent, and among whites at 8.7 percent.

The researchers also noted that despite continuing recommendations for drug screening in the 2010 guidelines, the percent of patients screened after the revised guidelines were issued actually fell. This, however, wasn’t seen as particularly surprising, Dr. Mackey said, pointing to a study that found it takes an average of 17 years for new treatment guidelines to be widely implemented.