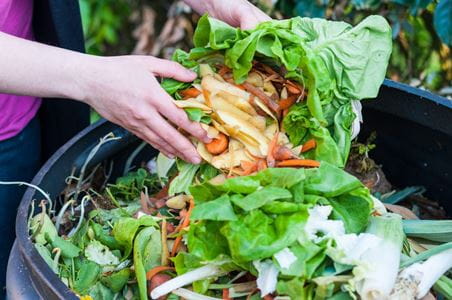 INDIANAPOLIS — A collaboration between Butler University and IUPUI beat entries from 225 other colleges and universities to win the $50,000 Sustainable Campus Competition LIVE! by presenting a proposal to expand food-waste composting at both universities.

IUPUI Sustainability Director Jessica Davis and Butler Sustainability Coordinator McKenzie Beverage presented “University Collaboration to Scale Food Waste Collection on Campus and in the Community” on Monday, Oct. 10, in Baltimore before a panel of judges at the Association for the Advancement of Sustainability in Higher Education Conference and Expo.

Their plan will begin with both universities sharing the cost of having a trash hauler cart away the food waste from dining halls at both campuses. The hope is to eventually bring other Indianapolis organizations on board to share — and ultimately lower — the cost of hauling.

“The idea is to remove the barrier to entry, change the market and make this more affordable for other organizations to participate,” Beverage said.

Each university hauling food waste on its own was cost-prohibitive, so Beverage approached IUPUI in the spring, and together she and Davis devised the proposal to collaborate. Through the recruiting of community partners, commercial composting will become cost-competitive in Indianapolis.

“Sustainable solutions don’t begin and end on our campuses. For sustainability to be impactful, it must go beyond the campus,” said Davis.

Sustainable Campus Competition LIVE! was hosted by Kimberly-Clark Professional. The competition featured three rounds. All entrants submitted their best idea in 500 words or less about a campus initiative related to energy, waste, food, water or climate change. From there, 10 semifinalists were invited to submit a two-minute video and a one-page financial overview of their project. Three finalists were chosen to present their projects in front of the panel of judges and a live audience at the AASHE Conference & Expo.