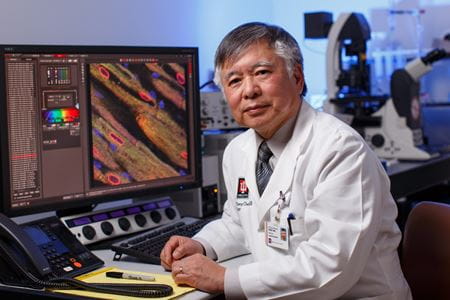 INDIANAPOLIS — A life sciences company based on Indiana University technology has received a two-year, $1,472,476 grant from the National Institutes of Health to help researchers determine if nerve activity is associated with a common heart rhythm disorder.

Officials at Arrhythmotech LLC will use the STTR Phase II grant on new methods to study patients who are affected by atrial fibrillation. Atrial fibrillation causes the heart’s upper chambers to contract irregularly instead of working together with the lower chambers.

The company is developing a device capable of detecting, on the skin, the nerve activity that is responsible for the body’s fight-or-flight response. Its platform technology could potentially be widely used in the medical field.

Dr. Peng-Sheng Chen, co-founder of Arrhythmotech, said the grant will allow him and his colleagues to better establish the company’s technology. Chen is also the Medtronic Zipes Professor of Cardiology, director of the Krannert Institute of Cardiology and chief of the Division of Cardiology in the Department of Medicine at the IU School of Medicine.

“The grant will allow us to collaborate with investigators at the Mayo Clinic in Rochester, Minnesota, and at Cedars-Sinai Medical Center in Los Angeles,” he said. “After the grant period has ended, Arrhythmotech will determine the next steps to make the method widely available to the medical community for research, education and patient care.”

Arrhythmotech was formed through the Spin Up program at Indiana University Research and Technology Corp. It received a Phase I STTR grant worth $212,634 from the NIH in 2014. It also received $15,000 and won second place in the 2015 BioCrossroads New Venture Competition.

IURTC is a not-for profit corporation tasked with the protecting and commercializing of technology emanating from innovations by IU researchers. Since 1997, IU research has generated more than 2,700 inventions resulting in over 3,900 global patent applications being filed by IURTC. These discoveries have generated $133 million in licensing and royalty income, including $111 million in funding for IU departments, labs and inventors.