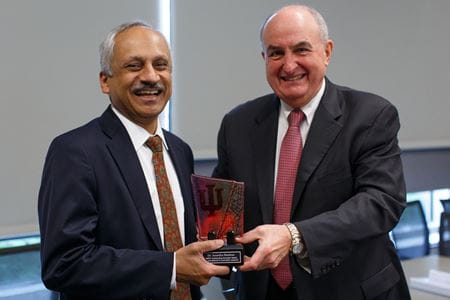 Shekhar is the August M. Watanabe Professor of Medical Research and a professor of psychiatry, neurobiology and pharmacology in the Indiana University School of Medicine and co-founder of Anagin LLC. He will also lead the Precision Health Initiative, the first recipient of funding under the university’s new $300 million Grand Challenges Program.

Indiana University President and IURTC Chairman Michael A. McRobbie presented the award to Shekhar at the June 22 meeting of the IURTC board of trustees. McRobbie said the development and commercialization of Shekhar’s research reflect some of the goals set out in the university’s Bicentennial Strategic Plan.

“Indiana University is committed to contributing to the economic development and prosperity of Indiana by translating discoveries and innovations of its faculty into new products, services and companies,” he said. “Anantha has proven to be one of the leaders in this area by developing his research of post-traumatic stress disorder through the IURTC SpinUp program and delivering his work to improve people’s lives around the globe.”

Shekhar co-founded Anagin with Yvonne Lai, a senior scientist with IU’s Department of Psychological and Brain Sciences in Bloomington and the Indiana Clinical Translational Sciences Institute. The company won the third annual BioCrossroads New Venture Competition in 2014 and has received more than $950,000 in federal grants to develop its treatments for post-traumatic stress disorder and traumatic brain injury.

“I appreciate this recognition from IURTC, especially because there are many innovative researchers throughout the Indiana University campuses and schools. The impact of the research being done at IU extends around the world,” Shekhar said. “People around the world are affected by post-traumatic stress disorder, and my goal is to alleviate the suffering they face on a daily basis. That is the hope of all researchers: to reach the people who can benefit most from their innovative work.”

IURTC President and CEO Tony Armstrong said the organization’s mission is to protect IU intellectual property and bring it to market.

“It is vitally important to ensure that important discoveries made at Indiana University reach the people who can benefit from them,” he said. “IURTC was founded in 1997 to assist IU faculty and researchers in bringing their best ideas to the marketplace. From helping to secure the appropriate legal protection for their discoveries to finding the right business partners to market them, IURTC plays a critical role in bringing IU innovation to the world.”

About the Indiana University Research and Technology Corp.

IURTC is a not-for-profit corporation tasked with the protecting and commercializing of technology emanating from innovations by IU researchers. Since 1997, IU research has generated more than 2,700 inventions resulting in over 3,900 global patent applications being filed by IURTC. These discoveries have generated $133 million in licensing and royalty income, including $111 million in funding for IU departments, labs and inventors.