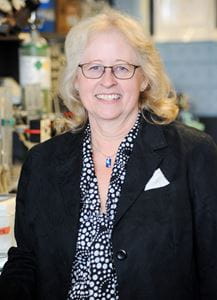 INDIANAPOLIS — A biologist in the School of Science at Indiana University-Purdue University Indianapolis is developing treatments for polycystic kidney disease, which affects between one in 400 and one in 1,000 people worldwide.

Bonnie Blazer-Yost, professor of biology, said the disease equally affects people across gender, race and ethnicity. It can dramatically change the kidneys’ appearance and function.

“Healthy kidneys normally are the size of a fist, but a kidney with cysts can grow to the size of a football,” she said. “All patients experience pain as the cysts grow, and some develop them in the liver. Fifty percent of people affected by the disease will progress to complete kidney failure. They will need either dialysis or a transplant to resume the kidneys’ function, which is to remove waste products from the blood.”

One part of Blazer-Yost’s research examines the effects of a commonly used diabetes treatment on polycystic kidney disease.

“This treatment has been used for over 15 years, and its side effects and long-term safety profiles are well-known,” she said. “My colleagues and I have shown that in preclinical animal models, the drug could be used at a concentration level that is approximately tenfold lower than the lowest dose to treat diabetes. This low dosage is important because it is envisioned as a lifelong medication that will be started when polycystic kidney disease is diagnosed.”

Blazer-Yost is also researching a natural chemical called LPA, or lysophosphatidic acid, that is found at high concentrations in fluid inside the cysts.

“Late in the disease, when the cysts become very large, they leak fluid or burst. This fluid bathes the outside of the remaining cysts, and LPA stimulates additional cyst growth,” she said. “My colleagues and I have found the most pertinent LPA receptor on the cysts, which makes it a promising drug target to control growth in the disease’s later stages.”

Indiana University Research and Technology Corp. has applied for patents on Blazer-Yost’s research and is seeking industry partners to further develop, license and commercialize it.

“We have received funding from the U.S. Food and Drug Administration for initial Phase I/II clinical trials of the diabetes treatment,” Blazer-Yost said. “We are currently enrolling patients.”

“A partner may come forward now or choose to wait until the trials are complete,” Blazer-Yost continued. “If they are successful, a larger clinical trial will be necessary. The LPA research is in its early stages and needs funding to conduct preclinical testing.”

Blazer-Yost’s research on the diabetes treatment has also been funded by the IUPUI Research Support Funds Grant.

IURTC is a not-for-profit corporation tasked with protecting and commercializing technology emanating from innovations by IU researchers. Since 1997, IU research has generated more than 2,700 inventions resulting in over 3,900 global patent applications being filed by IURTC. These discoveries have generated $133 million in licensing and royalty income, including $111 million in funding for IU departments, labs and inventors.