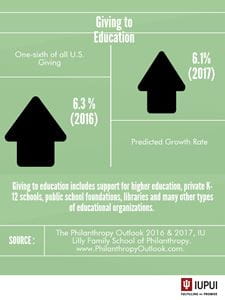 INDIANAPOLIS — A new report on charitable giving in the U.S. has much good news for the nonprofit sector, especially for education.

Giving to education is expected to grow by 6.3 percent this year and by an additional 6.1 percent next year, according to The Philanthropy Outlook 2016 & 2017, a new report researched and written by the Indiana University Lilly Family School of Philanthropy.

The report is presented by Marts & Lundy, a leading fundraising and philanthropy consulting firm. Projected rates of change are in 2014 inflation-adjusted dollars.

The Outlook provides data for predicted year-to-year growth rates in U.S. philanthropy for 2016 and 2017, including overall giving; giving by individuals/households, foundations, estates, and corporations; and giving to education. It also includes context and explanation for the economic factors and conditions that will significantly influence the predicted changes in giving.

“We project stronger growth in giving to education in 2016 and 2017 than in overall giving or in any of the sources of giving,” said Una Osili, director of research for the Lilly Family School of Philanthropy. “This may be due in part to the increasing interest of donors — and especially wealthy donors, foundations and even corporations — in funding higher education, as well as a growing role for philanthropy in K-12 education.”

Total charitable giving in the United States is expected to grow by 4.1 percent in 2016 and by an additional 4.3 percent in 2017, according to the Outlook.

“In light of the recent volatility of the U.S. economic environment, this is a positive sign for philanthropy,” said Amir Pasic, Eugene R. Tempel Dean of the school. “The prospects are good for solid growth in overall giving to nonprofits both this year and next.”

Giving to education includes support for higher education, private K-12 schools, public school foundations, libraries and many other types of educational organizations. Historically, giving to education at all levels has represented about one-sixth of all U.S. giving.

The Philanthropy Outlook 2016 & and 2017 projects that the changes in total giving for 2016 and 2017 will exceed the five-year, 10-year and 25-year annualized average rates of growth in total giving and will be just slightly below the 40-year average growth rate of 4.4 percent.

Giving by all source types is expected to rise in 2016 and 2017, the report projects. In each of the two years, growth in giving by foundations will be the largest, followed by growth in giving by estates and corporations. Individuals/households will give more in 2016 and 2017 as compared with prior one-year periods, but growth in giving by this source will be a bit more modest than the growth from the other sources, reflecting the unevenness of economic trends that shape households’ giving. Individuals/households represent the vast majority of charitable giving in the U.S.

Giving to education includes support for higher education, private K-12 schools, public school foundations, libraries and many other types of educational organizations. Historically, giving to education at all levels has represented about one-sixth of all U.S. giving.

“The involvement of a new generation of philanthropists is now bearing fruit, and institutions, particularly educational institutions that can inspire and engage donors in their future, have unique opportunities,” said John M. Cash, chair of the board of directors of Marts & Lundy. “The substantial projected increase in foundation giving, driven by new wealth in family-directed foundations, indicates that the importance of individual donors, particularly at higher giving levels, continues to increase. As the disparity between the very wealthy and the rest of our society grows, the new report demonstrates that nonprofits should focus their attention on all levels of giving and should pay special attention to the potential for securing leadership commitments from top-level donors.”

According to the report, economic factors that are expected to have the most significant, positive impact on U.S. charitable giving in 2016 and 2017 include projected growth in the S&P 500 Index, personal income, and the net worth of households and nonprofits, among others. However, the report stresses, certain conditions, such as changes in tax policy or significant changes in the world or U.S. economy, could affect the predictions for giving.

“We are extremely pleased to support this research as a critical tool for fundraising professionals and nonprofit leaders to help them optimize their fundraising activities and strategic planning,” said Donald M. Fellows, president and chief executive officer of Marts & Lundy. “With this new reliable, forward-looking forecasting model, leaders in the sector are now better able to maximize their efforts to fulfill their philanthropic missions.”

The report’s research team employed an econometric methodology to develop the projections for The Philanthropy Outlook 2016 & 2017. This type of methodology tests statistical relationships between variables. The researchers tested more than 16,000 combinations of economic variables that had the potential for influencing each type of giving, ultimately identifying 20 key predictors of giving. More information about the methodology is available in the full report.

About the Lilly Family School of Philanthropy

The Indiana University Lilly Family School of Philanthropy is dedicated to improving philanthropy to improve the world by training and empowering students and professionals to be innovators and leaders who create positive and lasting change. The school offers a comprehensive approach to philanthropy through its academic, research and international programs and through The Fund Raising School, Lake Institute on Faith & Giving, and the Women’s Philanthropy Institute. Learn more. Follow us on Twitter @IUPhilanthropy or “Like” us on Facebook.

Marts & Lundy is the one of the world’s most innovative and successful fundraising consulting firms. With nearly 40 full-time senior consultants and analysts, Marts & Lundy offers clients an unparalleled depth of expertise and breadth of perspective on philanthropy. Since 1926, the firm has served thousands of clients, whose annual giving programs range from hundreds of thousands to millions of dollars and whose campaigns range from a few million to several billion. Founded in the belief that philanthropy has the power to transform not only institutions but, more importantly, the world in which we live, Marts & Lundy remains steadfastly committed to contributing innovative thinking and thought leadership to the profession of fundraising. Visit the website. Follow on Twitter @MrtsAndLndy and on LinkedIn and Facebook.