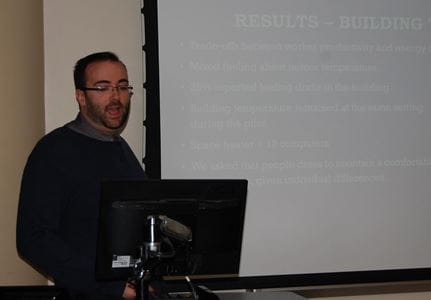 Results of each study, conducted by students from the School of Public and Environmental Affairs, were presented Tuesday to NSA Crane officials. The project was the first launched through an educational partnership agreement signed in October by IU and NSA Crane.

Three teams of students supervised by William Brown, IU’s director of sustainability, spent early October obtaining baseline data for energy use at a 31,233-square-foot administrative support facility built in 1944, a 68,000-square-foot structure built in 2006 that holds 202 Army and Navy personnel, and the Navy Gateway Inn and Suites, a 28,300-square-foot building constructed in 1999.

The teams applied behavioral science tools — such as commitment, social norms and prompts — focused on energy reduction, and then measured energy use at each building from Oct. 19 through Nov. 5.

In terms of costs, the reduced energy use at the Army/Navy facility equates to a potential savings of more than $6,000 annually. Estimated savings of $660 at the administrative support building during the pilot period extrapolates to roughly $11,440 a year, while savings of $40 per day at the hotel amounts to about $14,600 annually.

“I think the cumulative results of this project support our objective going in, which was to show that applying behavioral science to influence energy conservation is cost-effective and scalable,” Brown said. “Because the pilot period was short, other factors may have contributed as well — or the approaches we used might have proven more effective over time. A longer study could determine that more definitively, but the key still lies in getting people to change how they think about energy consumption.”

NSA Crane’s commanding officer, Cmdr. Tim Craddock, said the students gained valuable experience with interacting in a large workforce where some members may prove apathetic when it comes to energy conservation.

“Some workers may be all for it. Others may not care. That’s life,” Craddock said. “When it comes to human behavior, no one rule works all the time, and no one idea applies all the time. A wide variety of things must come together to make things work. Hopefully this gives the students a better understanding of that dynamic so they are better prepared when they enter the real world.”

Energy efficiency is a key initiative for the Navy. In 2009, President Obama signed an executive order that set sustainability goals for federal agencies focused on improving environmental, energy and economic performance. In turn, the Navy has engaged in several strategies, including behavioral-change campaigns, to curb energy use.

This pilot project is an effort to help NSA Crane replicate the success IU Bloomington experienced through the IU Energy Challenge, which Brown also leads. Since its 2008 inception, the Energy Challenge has saved IU 4.8 million kilowatt-hours (kWh) of electricity, 16 million gallons of water and more than $1.2 million in energy costs.

When applied to residence hall, classroom, lab and administration facilities at IU Bloomington, behavioral-science tools have lowered energy usage up to 20 percent, with changes persisting for months after the interventions, Brown said.

Some challenges were encountered. For example, rooms at the hotel must be “walk-in ready,” so appliances could not be unplugged. At the administrative support building, windows in its historic facade could not be opened, and when temperature controls fail, inside temperatures can exceed those outside.

In some cases, it was found that reduced automation could significantly reduce energy consumption. One of the SPEA teams suggested giving building occupants the option to use task and natural lighting rather than overhead lighting.

“What we saw emerge from this study is the kind of outcome we anticipated when IU entered the Educational Partnership Agreement with NSA Crane,” said Kirk White, IU assistant vice president and military liaison. “We saw talented students step up and put skill sets to use that NSA Crane might not otherwise have access to. At the same time, these students gained applied experience that will boost their job prospects upon graduation.”

About Innovate Indiana: Indiana University is designated as an Innovation and Economic Prosperity University by the Association of Public and Land-Grant Universities. This recognizes IU’s commitment across all its campuses to being a leading institution in fostering regional economic development. Led by IU’s Office of the Vice President for Engagement, the university’s Innovate Indiana initiative engages strategic partners to leverage and advance the university’s intellectual resources and expertise, enhance Indiana’s economic growth, and contribute to the overall quality of life for Hoosiers.

About NSA Crane: Naval Support Activity Crane is located about 25 miles southwest of Bloomington, Ind. The installation occupies about 64,000 acres and spans into Martin, Greene and Lawrence counties.  It is the home of Naval Surface Warfare Center Crane Division, which leverages electronic, engineering and technical capabilities to provide solutions to the warfighter. Crane Army Ammunition Activity also calls the base home and is responsible for storing, distributing and producing a variety of conventional military munitions and components.