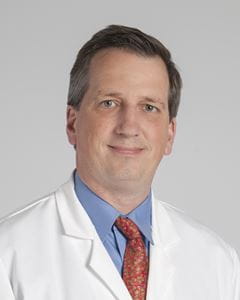 INDIANAPOLIS — Bruce T. Lamb, Ph.D., a neuroscientist at Cleveland Clinic’s Lerner Research Institute, has been named director of the Stark Neurosciences Research Institute at the Indiana University School of Medicine.

Dr. Lamb’s research has focused on the basic disease mechanisms of Alzheimer’s disease, including the genetic factors involved in the metabolism and buildup of the protein that makes up the plaque deposits associated with the disease. His work has shed light on how complex mechanisms associated with Alzheimer’s have hampered efforts to find effective treatments in clinical trials. His lab also has studied the relationship between traumatic brain injury and Alzheimer’s disease.

Approximately 50 IU scientists are primary investigators and members of the Stark Institute, conducting research in such areas as pain, spinal cord and brain injury, addiction, movement and neurodegenerative disorders. The center’s researchers brought in about $11 million in research awards in fiscal year 2015.

“The Stark Neurosciences Research Institute is uniquely poised to transform translational neuroscience research and to ultimately provide meaningful and effective treatments for a wide variety of neurological and psychiatric disorders,” said Dr. Lamb. “I look forward to taking the leadership of the Stark Institute and to working closely together with the existing neuroscientists and clinicians as well as building upon these strengths to transform both our understanding and treatment of these disorders.

“Notably, due to changing population demographics, as a society we are potentially facing the tripling of the number of Alzheimer’s disease and other neurodegenerative disease cases in the next 30 years. I am convinced that the Stark Institute can play a critical role in addressing this unmet need and for ultimately providing meaningful interventions for patients.”

“The Stark Neurosciences Research Institute has resources that set us apart from other academic medical centers,” said Jay Hess, M.D, Ph.D., vice president for university clinical affairs and dean of the IU School of Medicine. “I anticipate, with Dr. Lamb’s leadership and expertise combined with the school’s clinical talent and research infrastructure, we’ll see the institute’s capacity grow in unique therapies for patient care as well as broader opportunities for clinical trials.”

The Stark Institute was created in 2003 as a multidisciplinary research institute in the neurosciences with the assistance of a $15 million gift from Paul and Carole Stark. Paul Stark, M.D., served as a faculty member in the Division of Clinical Pharmacology at the IU School of Medicine, was a research leader at Eli Lilly and Co. and founder of the International Clinical Research Corp.

Dr. Lamb, who received his Ph.D. in molecular biology at the University of Pennsylvania in 1991, joined the faculty of the Department of Genetics at Case Western Reserve University in Cleveland in 1996. In 2005 he relocated his lab to Cleveland Clinic’s Lerner Research Institute, where he now serves as a full staff member, equivalent to the position of professor.

A fellow of the American Association for the Advancement of Science, Dr. Lamb is co-director of the Center for Research Excellence in Neurodegeneration at the Cleveland Clinic and a member of the Medical and Scientific Advisory Council for the National Alzheimer’s Association. His work is funded by multiple research grants from the National Institutes of Health, the Department of Defense, the Alzheimer’s Association and other foundations and corporations.

Dr. Lamb will join the Stark Institute on Jan. 18, 2016. He succeeds Gerry Oxford, Ph.D., founding director of the Stark center, who is retiring.