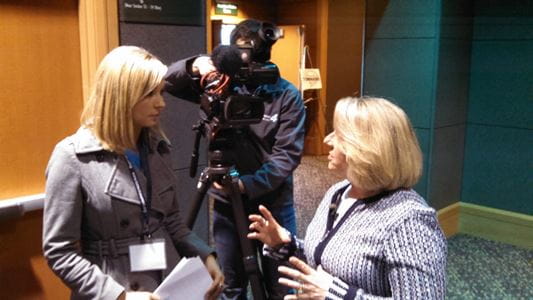 INDIANAPOLIS — The Indiana Department of Homeland Security has teamed up with students from the School of Liberal Arts’ Department of Journalism and Public Relations at Indiana University-Purdue University Indianapolis to form an agency/university partnership model that is now being presented on a national level.

IUPUI public relations lecturer Julie A. Vincent and IDHS director of communications John Erickson were session speakers Feb. 25 at the National Tornado Summit in Oklahoma City, Okla. Their session titled “An Agency/University Partnership — Could it work for you?” detailed the collaboration that benefits both IDHS and the IUPUI students.

Vincent says the collaboration is really a win-win arrangement: It gives IDHS extra sets of hands in times of emergency or large-scale exercises and gives her students experiences not routinely offered to this age group, as well as impressive resume and portfolio content.

“We first included IUPUI public relations students and Julie in February 2012 to monitor various social media sites 10 days before, during and 10 days after Super Bowl XLVI,” Erickson said. “We then used students again in the spring of 2012 to help us after southern Indiana experienced a day of deadly tornadoes. From then on, we have included IUPUI students in various exercises and internships and have even offered some students full-time employment after graduation.”

Vincent said her students, through their exposure to IDHS, have broadened their network of people, their view of the world and their skill sets.

“Several IDHS employees regularly serve as guest lecturers in our Public Relations Issues and Crisis Management course,” Vincent said. “And our students regularly take part in events like last July’s Vibrant Response, the largest weeklong, major field training exercise ever held in North America directed by U.S. Northern Command and executed by the U.S. Army North. It was just great for IDHS and the other exercise agencies and offered our students a once-in–a-lifetime opportunity.”

Vincent and Erickson are now in the process of training students to be members of the inaugural voluntary IUPUI Social Media Strike Team. This team includes students each semester who are trained and receive limited credentials to be on call in the event of a real-world emergency and/or the Joint Information or Emergency Operations Center is activated. With the IUPUI campus within walking distance of the IDHS offices, students can provide the agency with a quick response should they be needed.

During their talk at the National Tornado Summit, Vincent and Erickson encouraged other agencies and states to reach out to nearby colleges and universities with journalism or public relations programs to see whether a university/agency partnership could work for them.