Artist brings his brand of war to IUPUI campus 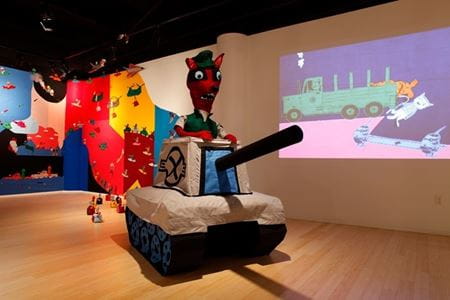 INDIANAPOLIS — Mixed media artist Chris Dacre will bring his humorous, yet satirical depiction of the complexities of war to the IUPUI campus in January.

Exhibit visitors in their 30s and 40s could have flashbacks to Saturday mornings spent watching “G.I. Joe” and other cartoons interrupted by commercials featuring the Kool-Aid Man breaking through walls and uttering “Oh yeah!”

In the Herron exhibit, “a big, soft sculpture tank and its driver — has replaced the Kool-Aid Man, breaking through a wall into a young boy’s room . . . while outside the room, life-sized sculptures of soldiers wage war,” Dacre said during a phone interview.

The subject of war has always fascinated the Denver-based artist who spent eight years in the U.S. Air Force before earning a bachelor’s degree in graphic design and a master of fine arts degree in studio art and printmaking.

“What interests me most about war, is the way that we recruit for, stockpile and wage it around the globe, oftentimes in the name of freedom and liberty or some other guise,” wrote Dacre in an online artist statement.

His goal for his art is to spark conversation about the realities of war and the military-industrial-entertainment complex which surrounds it.  While he isn’t an expert in military history, his art, along with talks he gives based on his research, provide food for thought for exhibit goers.

“My job is to disseminate information that most people won’t get in everyday news. My art exhibit can become a platform to have a discussion about these issues,” Dacre said.

For example, the tank and its driver bring to mind the hundreds of inflatable tanks crafted for use in World War II. It provides an opportunity to discuss the little known history of the Ghost Army, a secret unit of soldier artists — including then budding fashion design Bill Blass — who employed the tanks and recorded sound effects to deceive enemy soldiers.

And many of the images of soldiers aren’t human in form. For example, the tank driver resembles a cartoon wolf. Making the players less human, serves to reduce the emotionalism often inherent in dialogue about war and violence, Dacre said.

While viewers could come away from the exhibit thinking that Dacre is either pro-war or a pacifist, the artist believes that those who are willing to come “with an open-mind and take some time to figure it out, they can see what I am trying to say.”

Part of the exhibit’s message is that in a world where wars are often fought over the rights to natural resources needed to fuel our transnational consumer culture, we all play a role in world conflicts, Dacre said.

He has held exhibitions at numerous galleries and universities, including the Ohio  University Art Gallery, the University of Wisconsin, and the LuLuBell Toy Bodega and Gallery, Tucson, Az., just to name a few.

“War will be a topic for me for a long time,” Dacre said. “I’m always learning something new that I can share.”