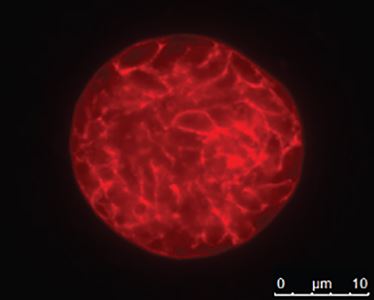 INDIANAPOLIS — The National Institutes of Health has awarded a $1.9 million grant to IU School of Medicine researcher William Sullivan, Ph.D., to find new ways to attack Toxoplasma, a dangerous parasite that infects an estimated 60 million people in the United States.

The parasite becomes a chronic infection by transforming itself into a latent cyst that evades the immune system. But when the immune system is compromised, such as in HIV infection or chemotherapy treatment, Toxoplasma can re-emerge and cause a variety of serious health issues.

The five-year grant will enable Dr. Sullivan and his team to build on more than a decade of research that began with a simple question: How do the parasites turn genes on and off, which is key to the transformation to the latent state?

What they did find was an enzyme named GCN5b, determining that it is necessary for the parasite to replicate and helps turn on genes needed for the parasite to go latent. Dr. Sullivan’s team found that GCN5b is involved with Toxoplasma genetic activity by interacting with plant-like transcription factors.

Because GCN5b is necessary for Toxoplasma replication, it’s a potentially important target for new drugs to attack Toxoplasma. Because it interacts with plant-like transcription factors, interfering with those interactions may be less likely to cause side effects in humans, Dr. Sullivan said.

The new grant will enable Dr. Sullivan and his colleagues to continue research to better understand how GCN5b controls Toxoplasma genetic activity, to develop new potential drug targets, and to identify compounds that could become those drugs.

For most people Toxoplasma infection produces flu-like symptoms or no symptoms at all. However, for people with immune system deficiencies the disease can cause serious effects including lung problems, blindness and seizures. Also, infants born to mothers who are infected for the first time during or shortly before pregnancy are at risk for severe complications, miscarriages or stillbirths.

One route to human infection is via cats, in particular their feces or litter. Eating undercooked meat from infected livestock can also result in human infection.

Researchers also use Toxoplasma as a model organism for the malaria parasite Plasmodium, meaning much of what is learned about Toxoplasma could lead to new treatments for a disease that struck an estimated 207 million people worldwide in 2012 and caused an estimated 627,000 deaths, most of them children. Dr. Sullivan noted that the malaria parasite also possesses a GCN5 enzyme, as well as the plant-like transcription factors.