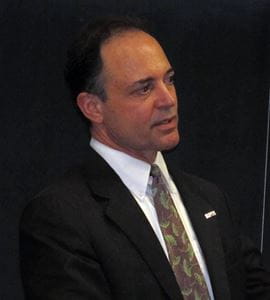 Latz will serve as president-elect for 2015, president in 2016 and past-president in 2017. The association, based at Duke University, is the main professional organization for leaders in international higher education.

“Gil Latz is very deserving of the honor of serving as president of AIEA,” said IUPUI Executive Vice Chancellor Nasser H. Paydar. “A scholar and thought leader, Dr. Latz brings a wealth of expertise and experience to his leadership roles in international affairs for IU and IUPUI and deserves much credit for setting a course for our strategic position as a global campus.”

He has interacted with Europe, the Middle East, Sub-Saharan Africa and Asia for some four decades, with a research focus on and travel to Southwest Asia, South Asia, Southeast Asia and East Asia.

His research and publications have focused on the internationalization of higher education in the U.S. and Asia; and regional development and resource management policy (agriculture and urban) in East Asia, North America and Europe. In addition to his longstanding study of the comparative dimensions of regional development, Latz conducts research on Japan’s modernization process in terms of the role played by philanthropy and civic leadership.

Latz’s secondary interests focus on international trade and educational video development. Most recently, he was appointed in 2013 as IUPUI representative to the core committee of the Brookings/JP Morgan Chase Global Cities Initiative Exchange, a project that explores the role of metropolitan areas in global trade, in collaboration with the Greater Indianapolis Chamber of Commerce, the Brookings Institution and IUPUI. Latz has worked extensively as an educational consultant on telecourse development to the Annenberg/Corporation for Public Broadcasting Project.

Among his recent accomplishments are serving on the executive committee of the Association of International Education Administrators since 2012; serving as co-chair of the Cooperative Development Committee for IUPUI/Sun Yat-sen University in Guangzhou, China, since 2013; and serving as co-chair for the internationalization track of the IUPUI Strategic Plan, Our Commitment to Indiana and Beyond, 2012-14.

Latz has also been an editorial board member of the University of Toronto Press’s Japan and Global Society Series and a review editor of Asian Perspective and the Journal of History and National and Social Sciences.

About AIEA
The Association of International Education Administrators, a membership organization formed in November 1982, is composed of institutional leaders engaged in advancing the international dimensions of higher education. AIEA brings together international education leaders with their counterparts from around the world who are furthering institutional internationalization.