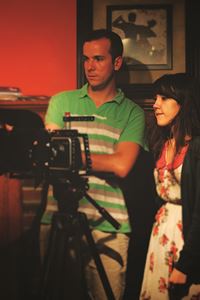 “Three Months,” by alumni filmmakers from the IU School of Informatics and Computing at Indiana University-Purdue University Indianapolis, and “We’ll Be All Right,” by IU Bloomington undergraduates, will be shown during Indiana’s largest and longest-running independent film festival. The festival will showcase more than 130 independent films from filmmakers around the world Oct. 16 to 25.

“Three Months” is a 20-minute film created by Matt Spear of Martinsville and Selena Hubbard of Greenwood. Both Spear and Hubbard studied media arts and science at IUPUI, with an emphasis in video production, and graduated this year. Hubbard and Spear co-wrote the film. Spear also directed and served as executive producer. Hubbard is a cast member and served as film producer.

“Three Months” tells the story of a man who puts off his dream. Now, after a cancer diagnosis, it may be too late. This film follows the themes of pursuing dreams and not pushing them off for another day.

The pair created the film for their senior year capstone project. With a few minor changes, they then submitted the film to be shown in the Heartland Film Festival, one of more 1,600 films submitted for consideration.

As they began working on the film, Hubbard and Spear decided they wanted the film to be about something that was personal and something to which they could relate.

One of the big themes in the films is about not being afraid to pursue your goals, because the time everyone has to do that is limited, Spear said. “We hope our film can be an inspiration to those students to take the risks needed to reach their biggest goals.”

“The cancer diagnosis is a way for the main character to realize you don’t have forever,” Spear said. “It is about life being short and you shouldn’t hold back on anything,” Hubbard said.

“We’ll Be All Right” is an 11-minute documentary by seniors Barton Girdwood of Lebanon, Ohio, and Carissa Barrett of South Bend. They completed the project as part of Susanne Schwibs’ documentary filmmaking class last spring in the Department of Communication and Culture, now in The Media School, at IU Bloomington.

“We’ll Be All Right” shares the story of Frankie Presslaff, his unique family and his extraordinary mother, Mimsie.

When Girdwood first pitched Mimsie to his film class, Barrett was hooked. “I knew immediately I wanted to be a part of it. It’s just not something you hear about every day, and I wanted a chance to help tell this family’s remarkable story.”

This particular family is what Girdwood describes as “thicker than blood.” Together, Presslaff and his longtime partner Kelly Compton are dads to eight adopted children.

“We really wanted to capture the emotions we felt while making the film and share with audiences the life, love, and wisdom Mimsie offered her family and the Bloomington community,” Barrett said. “This is a small slice of Bloomington culture that needed to be told for many reasons, but mainly to preserve the memory of Mimsie through the lives of her children and grandchildren.”

Read more about “Three Months” and filmmakers Hubbard and Spears on the School of Informatics and Computing website.

Read more about “We’ll Be All Right” and filmmakers Girdwood and Barrett on the Viewpoints blog.